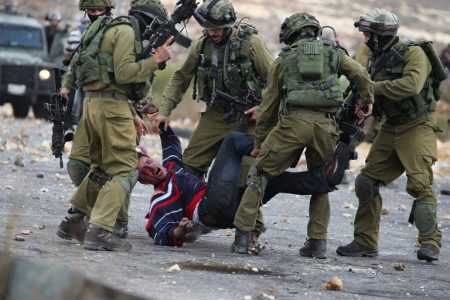 Several Palestinians, on Saturday at dawn, were detained from various West Bank locations, and a number of them were injured by Israeli soldiers, the Palestinian Information Center reported

No further information about the youth’s location or the nature of his injury was available at the time of this report.

Also in the southern West Bank, an unidentified Palestinian youth was detained from the Aida Refugee Camp, north of Bethlehem, and taken by Israeli forces to an undisclosed location.

Local sources said that the Israeli soldiers, on Friday evening, erected a flying military roadblock at the main entrance to Beit Fajjar, south of Bethlehem where they detained, and brutally beat Ali Issa Taqatqa, Ibrahim Ayed Derya, and Qusay Bagis before releasing them.

On Saturday, the three youths were reported to be admitted to Beit Jala Government Hospital for their injuries.

One young man was shot in the abdomen with a rubber-coated steel round, while many others choked on tear-gas.

The young man was transferred to a nearby hospital, no further information was available at the time of this report.

In related news, the Palestinian Prisoners’ Society in Tulkarem stated that an undercover force abducted a former prisoner, identified as Khaled Bassam Al-Hamshari, 26, from his home in Izbat Al-Jarrad, east of Tulkarem, north of the West Bank.

The PPS added that the army caused damage to the young man’s vehicle.