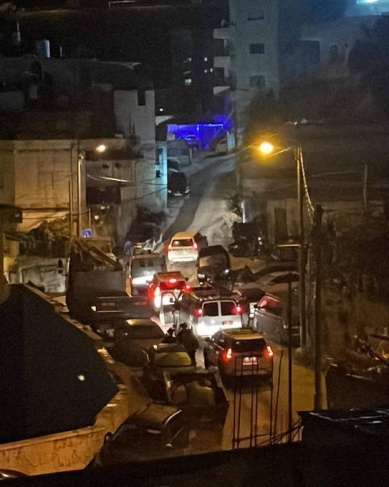 In the Nablus area, a number of Palestinians suffered from tear gas inhalation during clashes with the Israeli occupation forces in the town of Osrin, south of Nablus.

The Red Crescent said that clashes broke out near the entrance to the town of Osrin, which resulted in a number of citizens suffocating due to tear gas canisters.

Saturday evening, Israeli troops invaded the town of Al-Isawiya, northeast of occupied Jerusalem. According to local sources, Israeli forces stormed the town of Al-Issawiya and spread in its alleys and lanes, stopped vehicles and passers-by, checked their identities, and impeded their movement in the town.

Local sources reported that Israeli forces, stationed on the outskirts of the camp, fired rubber-coated metal bullets and tear gas canisters at the citizens during the clashes, without any injuries reported.

Saturday’s invasions follow a similar attack on Al-Arroub refugee camp, north of Hebron. A local source reported that the Israeli forces raided the camp and fired rubber-coated metal bullets and sound and gas bombs at the citizens and their homes, causing dozens of cases of tear gas inhalation.

In addition, the Israeli occupation forces abducted a citizen from the town of Tamoun, southeast of Tubas, at the Karama crossing.

The director of the Palestinian Prisoners Society in Tubas, Kamal Bani Odeh, said that the Israeli occupation forces abducted Ahmad Nabil Bisharat (24 years old) at the Karama crossing, after he returned from studying in Algeria.