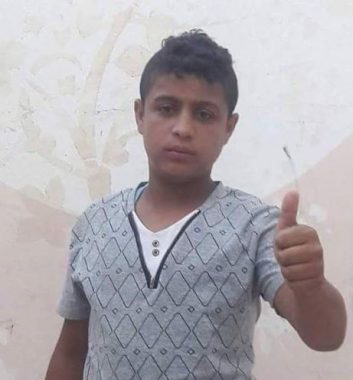 The Palestinian Health Ministry has confirmed, Friday, that Israeli soldiers killed one child, and injured 220 residents, including one journalist and two medics, during Great Return March protests in the Gaza Strip.

A video of the incident showed the child, along with other Palestinian protesters, near the border fence when the Israeli army sharpshooter killed him as he was held the railing of the fence, installed on Palestinian lands.

In addition, the soldiers injured 220 Palestinians, including two medics, and one journalist identified as Mo’in ad-Dabba, in the Gaza Strip.

The Health Ministry said 55 of the wounded Palestinians were rushed to hospitals in the coastal region, and added that 165 others suffered the effects of teargas inhalation.

Earlier Friday, the Health Ministry in Gaza released detailed statistics on the number of Palestinians who were killed and injured by Israeli army fire in the period between March 30th and July 7th, 2018 (not including Friday’s protest): At least one protester was killed and about 68 others were injured by Israeli forces on Friday, as hundreds of protesters made their way to the Gaza-Israel border as part of the ongoing Great March of Return protests, demanding their right to return to their homes in pre-1948 Palestine.

Soldiers manning the border fence fired live bullets and teargas canisters towards the protesters, who gathered at many encampments along the border, killing Othman Rami Hilles, aged 15, and injuring at least 68 others by gunfire.

Other protesters, meanwhile, sustained suffocation as a result of teargas inhalation, according to WAFA.

The Great March of Return protests began on March 30, for the commemoration of Land Day, when, in 1976, six Palestinian citizens of Israel were killed by Israeli forces, after protesting the confiscation of their land.

Demonstrations reached a peak on May 14, which marked 70 years since the Nakba – the ethnic cleansing of hundreds of thousands of Palestinians, by Zionist militias – upon which more than 60 protesters were shot dead by the Israeli forces.

Over 137 Palestinians were killed and some 15,000 others injured, since the outbreak of the protests, on March 30.