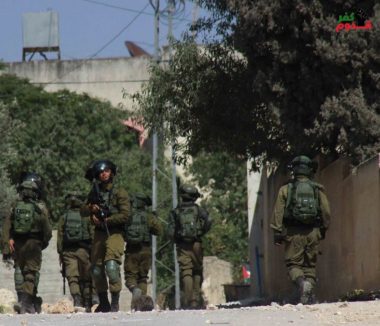 Israeli soldiers attacked, Friday, the weekly procession in Kufur Qaddoum town, east of Qalqilia, in northern West Bank, injured one Palestinian journalist, and caused many to suffer the effects of teargas inhalation.

They added that the soldiers shot Eshteyya with a rubber-coated steel bullet in his leg, and caused many Palestinians to suffer the effects of teargas inhalation.

The Popular Committee in Kufur Qaddoum said the Palestinians, accompanied by international peace activists, marched from the center of the village, heading towards their lands, near the illegal Annexation Wall, isolating them from most of their orchards.

The committee added that the soldiers ambushed the protesters between the olive trees before firing rubber-coated steel bullets and gas bombs at them, wounding the journalist and causing many Palestinians to suffer the effects of teargas inhalation.

Several protesters then hurled stones at the soldiers, while the army fire more gas bombs and rubber-coated steel bullets.

Kufur Qaddoum holds protests, every Friday and Saturday, against the Annexation Wall and illegal colonies, built on their lands, and to protest the closure of the towns’ main, which was blockaded fifteen years ago, to enable easy access for colonialist settlers driving to and from Kedumim colony, which was built on private Palestinian lands.

In the Gaza Strip, the Palestinian Health Ministry said, Friday, that Israeli soldiers killed one child, identified as Othman Rami Hallas, 15, and injured 220 residents, including one journalist and two medics.