Update: Israeli Soldiers Kill Three Palestinians, Including A Child, Injure 115, Including 2 Journalists And 4 Medics In Gaza” 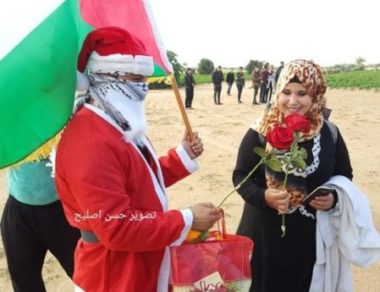 The Palestinian Health Ministry in Gaza has confirmed that Israeli soldiers have killed, three Palestinians, including a child, and a man with a mobility impairment, and wounded 115 civilians, including two journalists and four medics, during the Great Return March processions in the besieged and impoverished Gaza Strip.

The Palestinian Center for Human Rights (PCHR) has reported that Israeli forces Killed 3 Palestinian civilians, including a child and a person with a mobility impairment, and wounded 115 other civilians, including 21 children, 2 women, 2 journalists and 3 paramedics, in the peaceful demonstrations in the eastern Gaza Strip despite the decreasing intensity of the demonstrations there for the eighth week consecutively and absence of most means usually used during the demonstrations since the beginning of the Return and Breaking the Siege March 8 months ago.

The soldiers, stationed on sand hills and fortified military towers across the perimeter fence attacked the protesters with dozens of live rounds, rubber-coated steel bullets, high-velocity gas bombs and concussion grenades, especially on lands east of Gaza city, and east of the al-Boreij refugee camp, east of Jabalia in northern Gaza, in addition to Khan Younis and Rafah, in the southern part of the coastal region.

Dr. Ashraf al-Qedra, the spokesperson of the Health Ministry in Gaza, said the soldiers shot and killed Maher Atiya Yassin, 40, from the Nusseirat refugee camp, in central Gaza.

It is worth mentioning that Yassin suffered from a physical disability, and was killed east of the nearby al-Boreij refugee camp.

Dr. al-Qedra added that the soldiers also killed Abdul-Aziz Ibrahim Abu Sharia, 28, from the Sabra Neighborhood in Gaza city, after shooting him with a live round in the abdomen, east of Gaza city.

He also stated that the soldiers shot and killed a child, identified as Mohammad Mo’in al-Jahjouh, 16, after an army sharpshooter shot him with a live round in the neck, east of Gaza city.

The soldiers also injured at least 40 other Palestinians during the processions, along the eastern part of the Gaza Strip; two of the wounded are journalists, and four are medics.

Hundreds of Palestinians gathered Friday afternoon in several sites along the Gaza-Israel border to protest the ongoing, devastating Israeli siege and border closure of the Gaza Strip. One Palestinian teenager was shot dead by Israeli bullets, identified as Mohammad Jahjouh,16, while 40 were wounded by live bullets fired by Israeli soldiers into the unarmed crowd.

Among those injured were at least one paramedic and one journalist. In addition to live ammunition, Israeli forces fired tear gas, causing many of the demonstrators to suffer from tear gas inhalation.

One of the participants in the march was Santa Claus, who carried a Palestinian flag and handed out roses to participants.

Live ammunition was used by Israeli forces in at least two of the ‘Great Return March’ sites: Jabaliya, in northern Gaza, and east of Khan Younis, in southern Gaza.

Despite the fact that the Israeli military was dozens of meters away from the protesters, with an electrified fence along the border separating the soldiers from the demonstrators, the Israeli army again, as they have each week for months, decided to fire live ammunition into the crowd.

This use of live ammunition against unarmed demonstrators has resulted in more than 250 Palestinian demonstrators being killed in weekly protests that began March 30th, 2018. Such use of deadly force is a direct violation of international law and human rights conventions, but to date, no charges have been brought against the Israeli authorities by the International Court of Justice for their flagrant violation of international law.

No Israeli soldiers have been killed by Palestinian demonstrators participating in the ‘Great March of Return’ that has taken place each Friday since March 30th.

The protests began on Palestinian Land Day, and have continued weekly since March 30th, 2018 – the objective is to demand a return of Palestinian refugees to their land, which was illegally seized by the Israeli government through military force.

They are also demanding that Israel end its siege on Gaza’s air, land and sea, and to open the borders of Gaza that have been sealed since 2007.