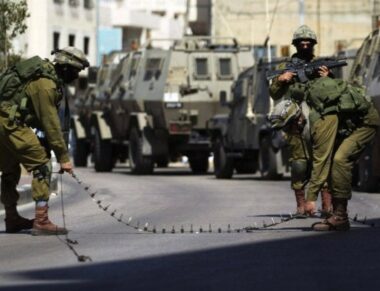 On Saturday, Israeli forces in the northern part of the West Bank invaded the Tulkarem District and stopped the Palestinian Department of Agriculture from carrying out a road rehabilitation project.

The Israeli forces then confiscated the Palestinian bulldozers that were being used for the project.

The attack took place in the village of al-Jarushiyya, north of Tulkarem in the West Bank.

Bahaa Khader with the Palestinian Ministry of Agriculture told the Palestinian Wafa News Agency that the Israeli troops invaded the site of the project, harassed and attacked the workers, and confiscated the equipment.

The land on which the project was taking place was Palestinian land, owned by local farmers.

A similar attack took place in the southern West Bank on Saturday, when a squadron of Israeli soldiers attacked Palestinian land surveyors in Masafer Yatta village, in the Hebron District.

According to local sources, a group of Palestinian technicians from the Land Settlement Authority were surveying land in the Umm al-Shaqhan area of Masafer Yatta village when they were attacked by invading Israeli soldiers.

The Israeli troops fired tear gas at the technicians, causing several of them to suffer from tear gas inhalation.

The location where the surveyors were working was near the illegal Israeli settlement of Avigal, constructed on stolen Palestinian land.