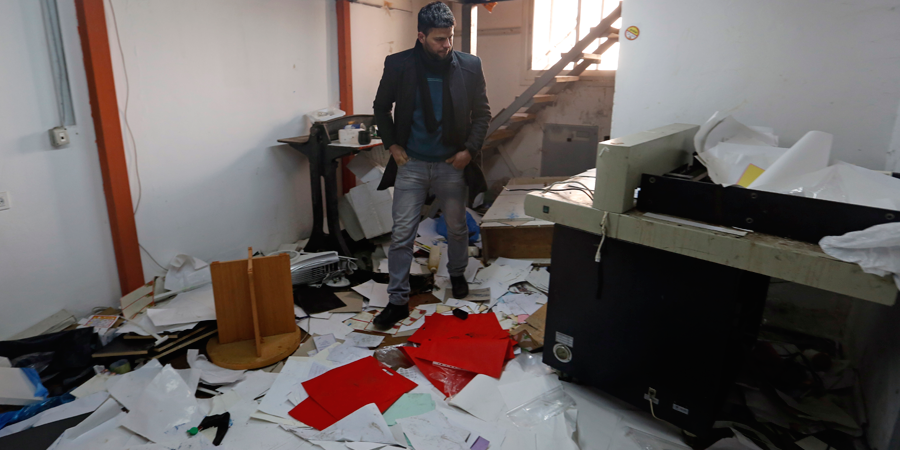 The owner of al-Nour Publishing House, Khaled Musaffar, said Israeli forces ransacked the office overnight and confiscated four printers as well as a computer. All of the equipment that remains in al-Nour was irreparably damaged, during the raid.

The Times of Israel – without mentioning al-Nour by name – reported, this morning: “the [Israeli] army shut down two printing shops, which it said were publishing ‘materials being used for incitement to terrorism.’”

“We didn’t learn about the raid until the next day, on Tuesday morning, when we went to the printing house as usual [and] found a paper on the door saying that the army was here and confiscated computers,” the owner of Zuwar told the Palestinian Center of Development and Freedoms (MADA).

In December, Israeli forces raided Asayel Yafa Publishing House in the West Bank city of Qalqilya too. Alleging the office distributes “inciting materials,” Israeli authorities closed Asayel Yafa for a month via a military order, confiscated all of its equipment (12 machines and two computers), as well as arrested the owner, Saber Mohammad Ali.

MADA, a Palestinian organization that defends the right to free speech, says such raids are further evidence of the Israeli government’s hostility to Palestinian rights – in particular, freedom of expression and the press.

According to MADA, in 2016 Israeli authorities committed a total of 252 violations against the Palestinian press in the occupied Palestinian territories. Violations include raiding and/or forcibly closing Palestinian media outlets, confiscating equipment used for publishing or reporting purposes, arresting journalists, committing violence against journalists, as well as passing new policy that chills free speech.

Of the 252 Israeli violations against the Palestinian press in 2016, six included raids on Palestinian-owned publishing houses in occupied territory. All six instances occurred during the final five months of 2016.