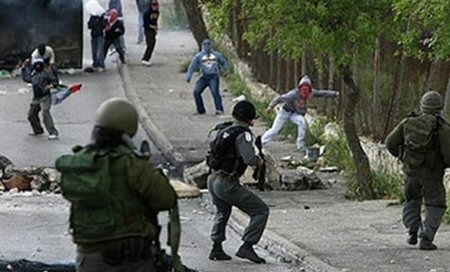 Dozens of solidarity activists and journalists, on Wednesday evening, suffered from tear gas inhalation, during Israeli occupation forces’ repression of a peaceful march at the Jerusalem Gate, in the town of Abu Dis, southeast of occupied Jerusalem.

Resistance to the wall and settlements, along with activists of the Popular Resistance Committees, Fateh and national action groups organized a peaceful march in protest against the plan to deport the residents of Red Khan to the area.

The participants, including the Minister of the Wall and Settlements Resistance Committee, Walid Assaf, raised Palestinian flags during their presence in the area near the Jerusalem Gate and chanted slogans “Go out, Occupation”.

He added, according to Al Ray, that soldiers stormed the area of the Jerusalem Gate, intended for housing the Bedouin communities located on the eastern side of Jerusalem, and destroyed the water reservoirs.

The Israeli Knesset passed a decision, three years ago, to seize lands belong to the residents of Abu Dis, an area of about 67 dunams, and to be used for the construction of mobile homes to accommodate the Bedouin communities, including the Red Khan, after being forcibly deported from the surrounding communities East of Jerusalem.