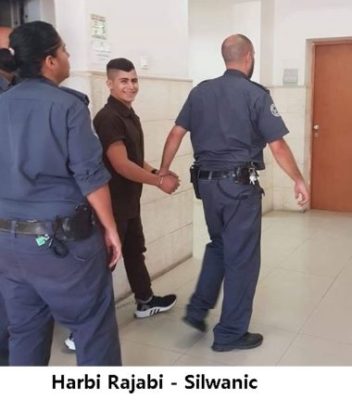 Israeli soldiers abducted, on Wednesday at night, a young Palestinian man from Silwan town, south of the Al-Aqsa Mosque in occupied East Jerusalem, while the military prosecutors’ office demanded remanding a detained child.

The Wadi Hilweh Information Center In Silwan (Silwanic) has reported that the police summoned Jadallah Rajabi for interrogated, and detained him for several hours before releasing him.

It added that the District Court in occupied Jerusalem ordered the release of a child, identified as Harbi Rajabi, also from Silwan, after issuing a house arrest order against him, but the prosecutor’s office demanded freezing his release order for 48 hours.

In related news, the soldiers summoned, Wednesday, Luay Sami Rajabi, for interrogation in the al-Maskobiyya detention and interrogation center.