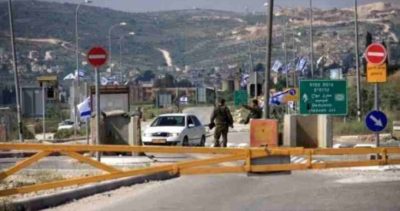 A group of Israeli soldiers on Wednesday detained Palestinian municipal employees in the village of Beit Fourik, in the northern West Bank, and seized several vehicles used for trash collection.

According to local sources, the vehicles that were seized include a garbage truck, a tractor used for hauling garbage and a third vehicle used in trash collection.

The vehicles were loaded with garbage and were headed to a landfill site east of the village, located near Nablus in the northern West Bank, when they were detained by Israeli soldiers in military vehicles.

The soldiers approached with weapons drawn and ordered the municipal employees out of their vehicles, then held them for several hours in the hot sun, and took the vehicles away to an unknown location.

The Palestinian Wafa News Agency spoke with Ata Samara, a health inspector with the Beit Fourik village council, who told them that this trash collection by the municipality is a daily collection, and this is the first time they have been harassed by Israeli occupation forces.

Samara added that the trash dump is located in Area B of the West Bank, which is administered by the Palestinian Authority but falls under Israeli military rule, adding that the village council was not informed by the army that it would no longer be allowed to dump there. He said the seizure of the truck and car is part of an effort by the Israeli army to make life difficult for the Palestinians in that village.

Without a trash truck or a place to put garbage, the Palestinians of the village will be forced to fend for themselves, which will likely result in a buildup of trash at homes in the village, and unsanitary conditions will result.

Israeli forces have targeted the village of Beit Fourik for collective punishment, in violation of the Fourth Geneva Convention, since March, when an Israeli settler was killed in a settlement nearby.