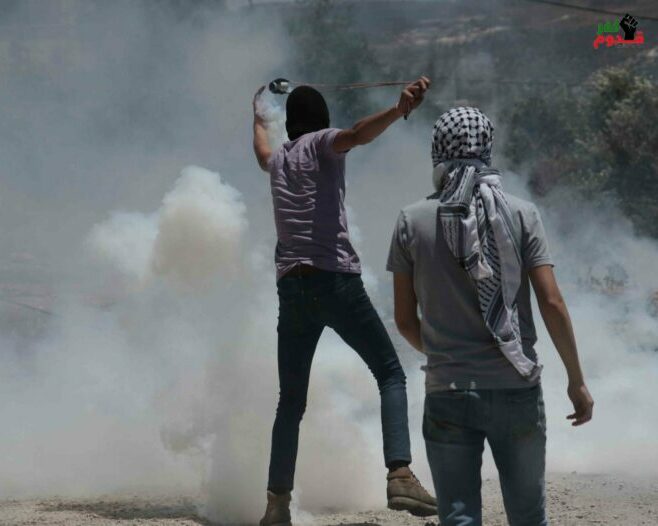 Israeli forces cracked down on the weekly procession in the village of Kufur Qaddoum, causing dozens of inhalation injuries, and in Ni’lin, two Palestinians were shot with live rounds during a peaceful protest against Israeli colonial activities.

In Kufur Qaddoum, east of Qalqilia in the northern occupied West Bank, Palestinian citizens gathered for the weekly peaceful demonstration to express their objection to the illegal settlements, and demand the main road to the village be reopened.

Mourad Eshteiwi, the media spokesman for the Wall and Settlement Resistance Commission stated that the army fired
teargas canisters and rubber-coated steel rounds at the demonstrators, causing dozens to suffer the effects of teargas inhalation. All injuries were treated at the scene.

For several years the residents of Kufur Qaddoum have held weekly processions in rejection of the illegal Israeli settlements, the apartheid wall, and the closing of the main road to the town.

The army fired live rounds, rubber-coated steel rounds, teargas canisters and stun grenades at protestors, striking two with live rounds. Both of the injured men were transferred to hospital for treatment.

Demonstrators assembled to express their rejection of the illegal Israeli settlements and the threat of annexation of Palestinian land.

The army uses excessive use of force against peaceful demonstrators, causing bodily harm and death. Just recently a young Palestinian man named, Zakaria Hamayel, 28, was shot with a live round in the chest while participating in a peaceful rally near Nablus.