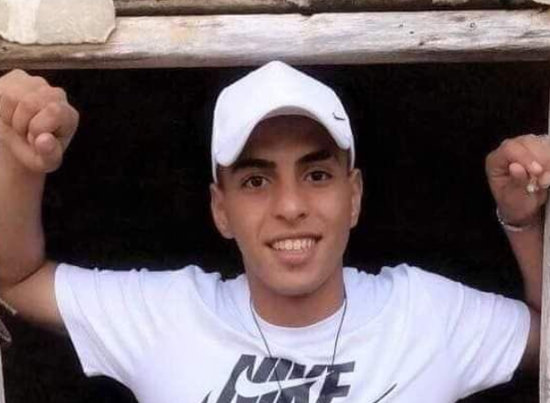 Israeli forces, on Monday, shot and killed a Palestinian teen and caused dozens more to suffer the effects of teargas, in the al-Arroub refugee camp, north of Hebron, in the southern occupied West Bank.

Palestinian WAFA News correspondent reported that occupation soldiers opened fire with live rounds, rubber-coated steel rounds, tear gas canisters, and stun grenades towards the youths protesting the invasion, killing 17 year old Obeida Akram Jawabra. Medical sources stated that the child was shot with a live round through the heart, which killed him instantly.

Dozens of Palestinian civilians gathered at the entrance of the camp and attempted to resist the army invasion, however they were met with excessive use of force by the Israeli army, causing dozens to suffer the effects of teargas inhalation.

In related news, Palestinian activist groups, on Monday, have called for mass protests on Tuesday, May 18 to show opposition to the continuous Israeli aggression against Palestinians in Gaza and the occupied West Bank for the past 10 days.

Rights groups began to organize via social media platforms and by early afternoon political groups and unions joined the effort.

The statement also called for mass protests all over the West Bank, Gaza and Palestinian communities inside of the 1948 Palestinian territories (Israel) in an effort to stop Israel’s vicious assault on Palestinian civilians in the besieged Gaza Strip and the West Bank.

Furthermore, prior to this report, the Palestinian Ministry of Health reported that Israeli forces have killed 21 Palestinians, including one child and injured 3728 in the West Bank alone.

The report added that Israeli airstrikes and shelling of residential buildings and infrastructure in the besieged Gaza Strip, has killed 198 Palestinian civilians, including 58 children and 35 women, and injuring 1300, and terrorizing the entire population of the coastal enclave.