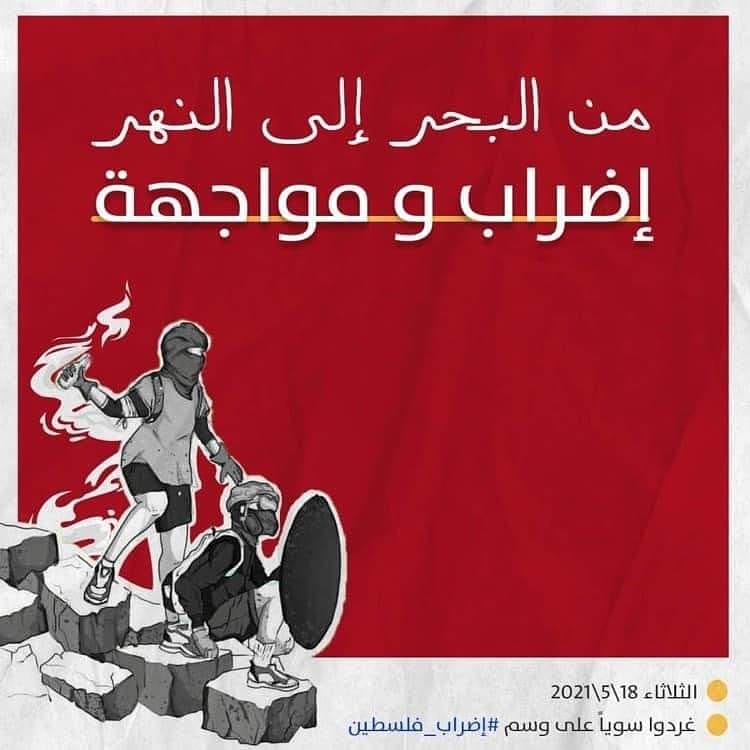 Palestinian political and activism groups called for a general strike and mass protests on Tuesday in protest of the ongoing Israeli offensive that is targeting Palestinians since 10 days.

On Monday, groups started to rally for the move via social media platforms and by early afternoon political groups and unions have joined the call.

The statements also called for mass protests all over the West Bank, Jerusalem, Gaza and Palestinian communities in Israel in order to stop the Israeli ongoing attack against Palestinians.

According the Palestinian Ministry of Health the number of Palestinians killed by Israeli attacks targeting Gaza and the West Bank in the past 10 days have reached 220 killed and 6039 Injured.

The Palestinian people, with the backing of several human rights organizations, have called for a general strike Tuesday May 18th, on behalf of the Palestinian People, in response to the recent atrocities committed by extremist Israeli citizens, police and military against Palestinians. The High Follow-up Committee for Arab Citizens of Israel has asked for the 1.6 Palestinian citizens of Israel also observe the strike. Organizations are coordinating peaceful associated demonstrations which are expected to take place in Palestinian communities within the Palestinian Territories and throughout the State of Israel.

Workers have been asked to participate in the strike in order to communicate to Israeli society at large the need to put pressure on their government to cease the continued violence and unfair treatment against Palestinians. The strike will include all businesses and industry with the exception of private education. The Lawyers Syndicate, the General Union of Teachers, and the Higher Committee of the Public Transportation, among other public unions and syndicates, issued calls backing the strike, as per a report by WAFA News Agency.

This labor action and series of demonstrations in precipitated most recently by the attempted displacement and eviction of Palestinians in the Sheikh Jarrah neighborhood of Jerusalem, and subsequent demonstrations including mass arrests and police brutality. What followed has been continued rocket fire between Israel’s military and Gaza. These strikes were said to be a retribution for rockets sent from Gaza May 10th, causing sirens to blare around Israel. 10 people have died in Israel due to rockets sent from Gaza.

Over 200 people, including 58 children have been killed in Gaza due to Israeli air strikes, and many buildings destroyed, including the offices of Al-Jazeera and the Associated Press.

#Gaza Civil Defense Dept. is in desperate need for specialized equipment to detect life under the rubble & to search for survivors & rescue them. They’re using borrowed construction diggers & cranes that are quite dangerous. Ask your governments to help. Please. #GazaUnderAttack

The following days have seen a rise in mob violence within the State of Israel against Palestinians and settler violence and intimidation against Palestinians within the West Bank, who have reported that they have felt not only abandoned by police, and in some cases have reported a perception that police are protecting the settlers and extremists, some of whom themselves believe the police and military to be sympathetic to their ideology.

UN High Commissioner for Human Rights, Michelle Bachelet said in a statement given on May 15th, ”The situation in Sheikh Jarrah in occupied East Jerusalem, triggered by threats of forced evictions of Palestinian families; the heavy presence of Israeli Security Forces and violence around the al Aqsa mosque during Ramadan; the severe escalation of attacks from and on Gaza; and the shocking incitement to racial hatred and violence in Israel have all led to vicious attacks and mounting casualties in the Occupied Palestinian Territory and in Israel.”

Demonstrations and vigils are also scheduled internationally in solidarity for Tuesday May 18th.

Day of Action in Solidarity with the Palestinian Uprising and General Strike: Tuesday, May 18