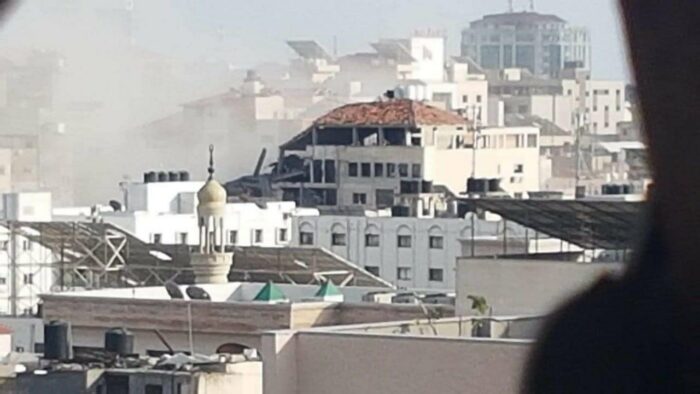 The week-long Israeli assault on Gaza, in which over 200 Palestinians have been killed, including 57 children, the Israeli airforce and artillery strikes have also targeted infrastructure, including two high-rise buildings housing international media companies, as well as medical facilities.

In the latest round of airstrikes, Israeli missiles destroyed the Al-Rimal clinic, located in the al-Rimal neighborhood of Gaza City, where airstrikes Sunday morning crushed two extended families numbering 39 people – including babies, children, parents and grandparents.

The al-Rimal clinic was the only COVID-19 testing site in the Gaza Strip, and the loss of this clinic leaves the already vulnerable population of Gaza extremely vulnerable to the COVID-19 virus. Before the bombardment began May 10th, the clinic had been testing an average of some 1,600 people per day.

Less than 60,000 people in Gaza, among a population of 2.5 million, have received the COVID-19 vaccination. The Israeli government, which controls the land, sea and air of Gaza, has refused to share its vaccine supply with the Gaza Strip.

The Russian and other governments sent 122,000 vaccine doses to Gaza, only half of which had been distributed before the Israeli bombardment began on May 10th.

Even before the hundreds of severely injured patients began arriving due to the Israeli bombardment, hospitals in Gaza had been overwhelmed by COVID-19.

On May 3rd, Doctors Without Borders issued a statement that “Between March and April, COVID-19 infections have risen at an extraordinary rate—driven by the more severe B.1.1.7 variant—from less than a thousand reported cases per week to more than a thousand reported each day. There has been an alarming increase in infections among health care workers in particular. Gaza’s second wave has already surpassed its first in severity and in the number of people infected, and hospitals are struggling to cope.”

The positive test rate in Gaza was 28%, among the highest in the world. According to the World Health Organization, 103,000 Palestinians in Gaza have tested positive for  COVID-19 in Gaza, of whom 930 died of the virus.

In addition, the office of the Palestinian Health Ministry (which is the main source of information about casualties in Gaza) and the Qatari-sponsored Red Crescent office were severely damaged.

According to the Palestinian health ministry, medical personnel at the Ministry office were wounded, some critically, when the airstrike hit.

Earlier this week, the al-Jalaa building, 14 stories high and one of Gaza’s tallest buildings, was leveled on the third day of the Israeli onslaught. It housed several media companies and numerous non-governmental organizations.

There was no evidence that any ‘Hamas headquarters’ were housed there or anywhere near it, in contradiction of Israeli claims.

Here is a video of Middle East Eye showing some of the destruction caused by the week of bombardment:

Targeting of medical facilities and personnel is a direct violation of international law and the Fourth Geneva Convention.