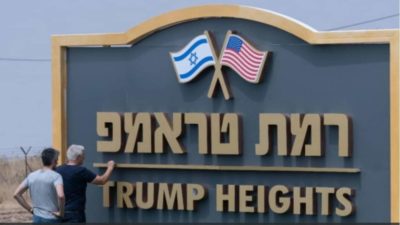 In a move aimed at gaining more support from the already-enthusiastic Donald Trump for their policies of land expropriation and expansion, Israeli authorities on Sunday established a new development they coined “Trump Heights”, with Binyamin Netanyahu presiding over the unveiling ceremony alongside U.S. Ambassador to Israel David Friedman.

The location for the new colony is on land stolen by Israel from Syria in the 1967 war, an area known as the Golan Heights, and illegally occupied by the Israeli military since that time. Donald Trump recently announced that he recognizes Israel’s claim to the territory – despite no internationally-recognized treaty or agreement ever having been signed ceding the territory.

Israeli Prime Minister Binyamin Netanyahu held a ceremony on the site on Sunday, renaming the colonial settlement of Bruchim to ‘Trump Heights’.

In his statement, Netanyahu said, “We are going to do two things — establish a new community on the Golan Heights, something that has not been done for many years. This is an act of Zionism and it is paramount. The second thing is to honor our friend, a very great friend of the State of Israel — President Donald Trump, who recently recognized Israel’s sovereignty over the Golan Heights.”

Next to Netanyahu stood David Friedman, the Trump-appointed U.S. Ambassador to Israel who has long been criticized for his blatant support of Israel’s illegal annexation of neighboring territory (including heading an organization in the U.S. that helps to fund this illegal colonization activity).

Friedman has also been criticized for a complete absence of diplomatic experience — his only apparent qualifications for the job of Ambassador being his work as Trump’s bankruptcy lawyer and his virulent support for Zionist expansionist politics.

“It’s absolutely beautiful,” said Friedman, adding, “I can’t think of a more appropriate and a more beautiful birthday present [for Donald Trump, who just had a birthday].”

Israeli journalists have pointed out that the ceremony is likely little more than a political maneuver aimed at feeding Donald Trump’s ego, since no action has actually been taken to establish the colony.

If action were taken to settle the area with Israeli civilians, it would be a direct violation of the Fourth Geneva Convention on the obligations of an occupying power.

Palestinian Children Exposed to Pesticides Sprayed by Settlers, near Bethlehem