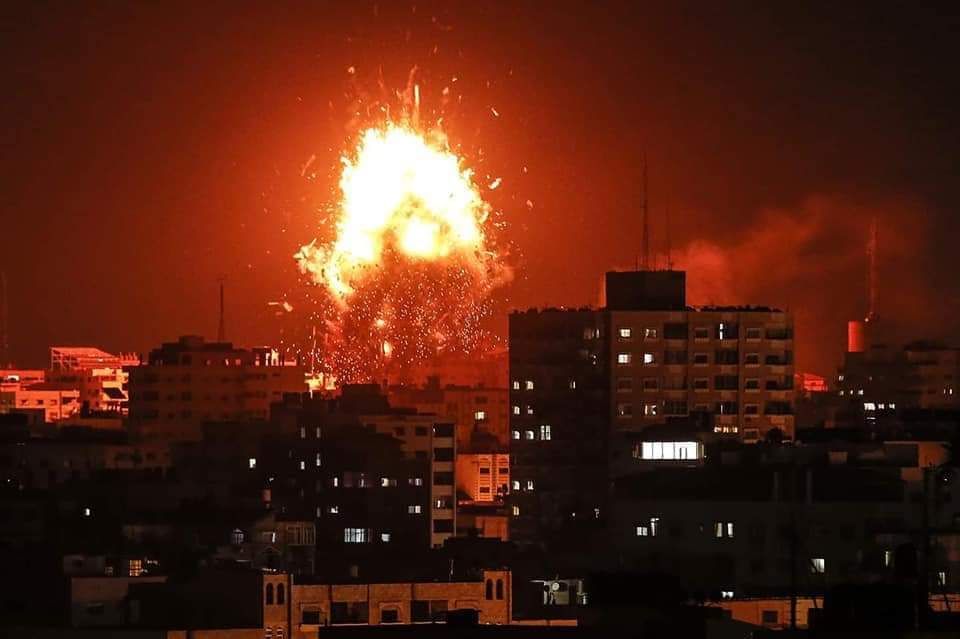 Late Thursday night, the fourth day of the current Israeli assault on the Gaza Strip, the Israeli military says it has begun ground invasion of Gaza. The announcement came in the midst of a wave of continuous airstrikes pounding every part of the Gaza Strip, killing dozens of Palestinians and causing millions of dollars in damage to buildings and infrastructure.

According to local sources, the Israeli military made an announcement just after midnight Thursday night/Friday morning that they have expanded their assault on Gaza to include ground forces, in addition to airstrikes.

Soon after, the electricity was cut off in the Gaza Strip (controlled by Israeli authorities), and Palestinians huddled in fear as airstrike after airstrike was followed by artillery tank shells fired from the border with Israel.

Palestinian resistance fighters responded by launching several homemade rockets toward the Israeli cities of Ashkelon and Tel Aviv. At least six Israelis have been killed by Palestinian rocket fire in the past three days.

During the same time period, over a hundred Palestinians have been killed, nearly a third of whom are children.

“Where are they? There were four!”

The moment a Palestinian father learns his four children have been killed by an Israeli missile strike in Gaza. #GazaUnderAttack  pic.twitter.com/PHaoRmCVR6

Palestinians in Gaza have no bomb shelters, and no safe place to hide.

The Israeli launch of a ground invasion have sparked fears of an all-out war similar to the one in 2014 in which over 2100 Palestinians and 60 Israelis were killed. The Gaza Strip has never recovered from that attack, which left the infrastructure of the Strip in ruins from Israeli bombardment.

Israeli authorities, which control land, sea and air access to the Gaza Strip, have imposed an economic blockade on Gaza since 2006, when the Hamas party won the Palestinian election. Israel did not like the outcome of the election, so they besieged the Gaza Strip, preventing the entry of food, medicine, fuel, building supplies and other essential goods.

Residents of northern Gaza, near the border with Israel, have reported that Israeli tanks stationed at the border have been firing into Gaza, but no ground troops have been seen invading on foot, at the time of this report.

Israeli authorities say that 9,000 army reservists have been deployed along the border with the Gaza Strip to prepare for a ground invasion.

Gaza is among the most crowded places on earth, with 2.5 million Palestinians crowded into a tiny coastal strip with no way in or out except through Israeli controlled checkpoints and borders.

Israeli Prime Minister Benjamin Netanyahu, who is currently on trial for fraud and corruption, posted on his social media, just moments after the announcement of the ground invasion, “I said that we would charge a very heavy price from Hamas. We do it and we will continue to do it with great intensity. The last word was not said and this operation will continue as long as necessary.”

The spokesperson for the al-Qassam Brigades, the armed wing of the Hamas party, issued a statement that the Brigades are not afraid of a ground invasion, and that Palestinian fighters are ready to intercept any Israeli soldiers invading the tiny, overcrowded coastal strip.

After the Israeli announcement of a ground invasion, the U.S. State Department announced that it will withdraw 120 Pentagon personnel stationed in Israel.

It is unknown why U.S. State Department personnel were stationed in Israel to begin with, since there has been no public announcement of the decision to station them there.

State Department spokesperson John Kirby said that the personnel were in Israel for a “routine planning event”.

The U.S. officials and military personnel were evacuated aboard a C-17 military aircraft to Ramstein, Germany.

“We made this decision to remove these individuals in coordination with our Israeli counterparts,” Kirby said at a Pentagon news conference.