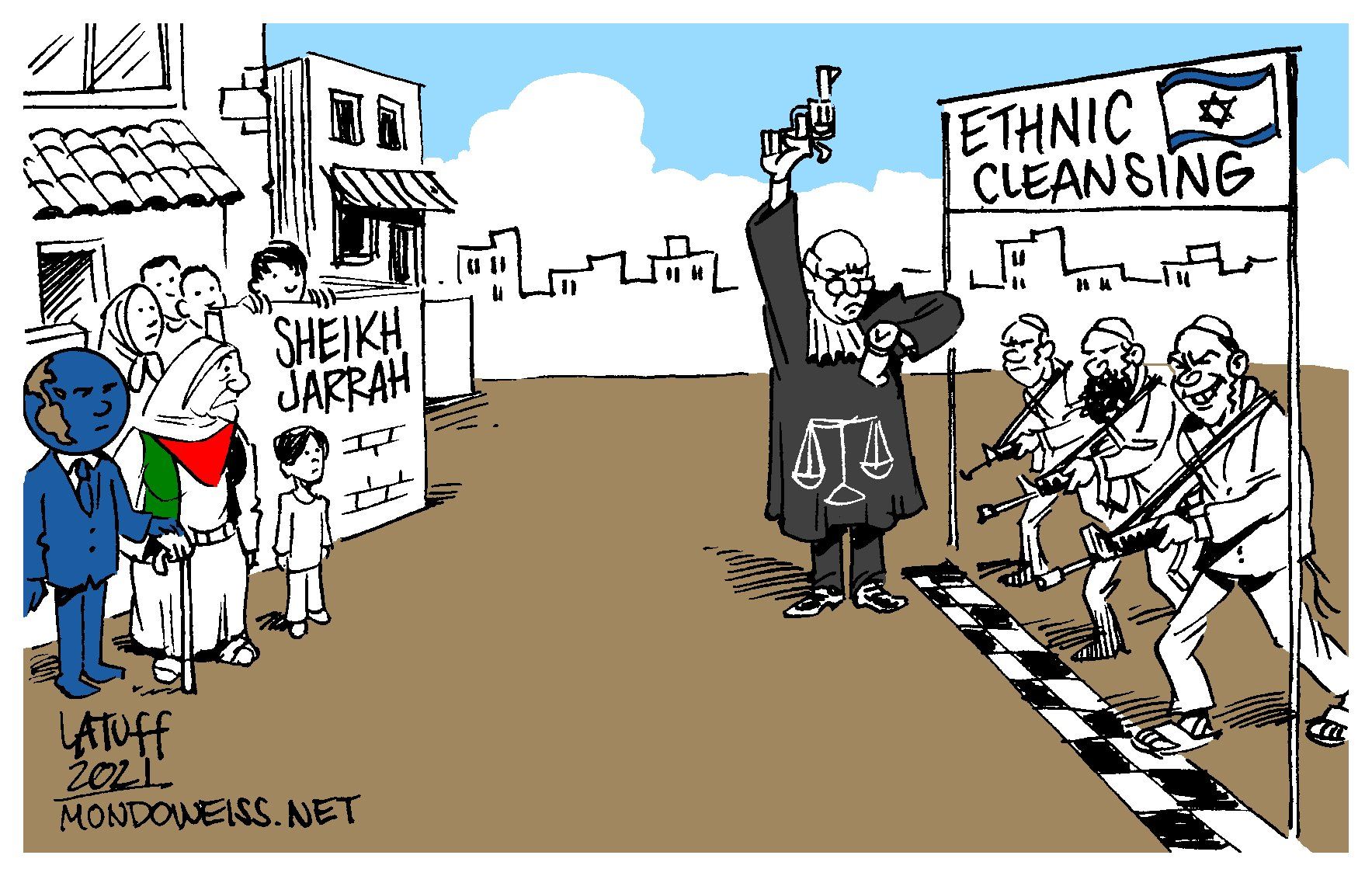 Updated: The Israeli High Court has postponed looking into appeals filed by four Palestinian families against rulings evicting them from their homes in Sheikh Jarrah neighborhood, in occupied Jerusalem, for the benefit of colonialist settlers.

The Court was scheduled to hold a hearing today, Sunday, but decided to delay the deliberations until this coming Thursday.

The appeals were filed by attorneys representing the indigenous Palestinian families of Eskafi, al-Kurd, al-Ja’ouni, and al-Qassem; the court is set to look into the appeals, Sunday.

The families filed all needed documents and deeds proving ownership of their lands and homes.

It is worth mentioning that the appeals were filed after an Israeli court ordered the eviction of the Palestinian families after Israeli colonialist settlers claimed ownership.

The initial Israeli court ruling, ordering the four Palestinian families out of their homes, was issued in September of the year 2020, and was followed by another ruling also evicting the families of Hammad, Dajani, and Daoudi from their homes in the same neighborhood.

The families are determined to continue to file appeals and defend their homes.

Late on Saturday at night, Israeli soldiers assaulted dozens of Palestinians, nonviolently protesting the eviction and displacement orders in Sheikh Jarrah, and forced them away.

Saleh Diab, a Palestinian nonviolent activist from Sheikh Jarrah, said the families, threatened with eviction today, May 2nd, consist of at least 50 members, including children and elders.

He added that the three families, threatened with eviction on August 1st are nearly 70 members, including children and elders.

At least 28 families, (about 550 indigenous Palestinians) live in Sheikh Jarrah and are facing eviction and displacement from their homes they inhabited more than 48 years ago.

Israel is planning to build and establish more than 540 colonialist units in the area, and is currently building 54 units, in addition to the ongoing efforts to link them with the Police Command in Sheikh Jarrah and the French Hill settlement in addition to the Hebrew University, as part of the so-called “Jerusalem Belt” colonialist plan linking the colonies with different Palestinian areas in al-‘Isawiya, Rad al-‘Amoud, Wadi ar-Rababa and many other areas, and aim at connecting East Jerusalem with West Jerusalem with this belt of illegal colonies after displacing the indigenous Palestinians.

The Israeli colonialist plan, which is intended to be implemented in phases through many years, was put forth by the government, the Jerusalem City council, the Israel Antiquities Authority and various colonialist organizations in Israel and other counties, and has a budget of 537 Billion Israeli Shekels.

It is worth mentioning that Ireland called on Israel to abide by its international and legal obligations, and to respect all related agreements on the protection of Palestinian civilians, especially according to the Fourth Geneva Convention.

Ireland said its position regarding Jerusalem is based on International Law, and added that Israel’s colonies violate this law, in addition to various United Nations and Security Council resolutions, and the Fourth Geneva Convention.

It added that colonies are an obstacle to the efforts to achieve a comprehensive peace in the region, and called on Israel to stop its colonialist activities and violations.