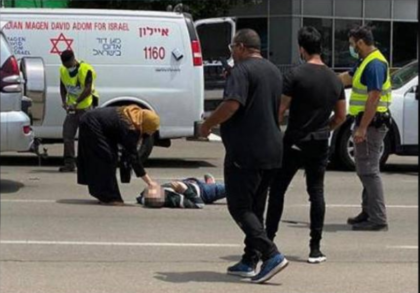 Security guards at a Tel Aviv hospital on Wednesday killed an epileptic Palestinian man in front of his mother. He was killed at the entrance to the hospital where he frequently received treatment for his epilepsy.

Mustafa Younis, from Aara town, was killed by the guards after an argument at the entrance to the hospital. A video shows three security guards shooting Younis, who has his hands up and is standing near the driver’s side of his car.

The attack took place at Sheba hospital in Tel Aviv, where Younis had gone with his mother to seek treatment.

The three security guards all shot at him, with seven bullets hitting him at close range, killing him while his mother looked on, horrified but unable to stop the killing of her son.

Israeli sources claimed that Mustafa tried to stab the guards, but that claim contradicts the video evidence — and there was no evidence presented to back the absurd claim.

“My brother was murdered in cold blood,” said Mahmoud Younis, Mustafa’s younger brother. He went to Israeli Sheba Hospital in Tel Aviv at noon today, which refutes the official Israeli account that claimed that the martyr stabbed one of the guards.

The victim’s uncle, Dr. Issam Younis, told reporters with the Palestine News Network, “He used to come to the hospital for treatment every six months, and he had already been there several months ago. For four days, he was preparing for a brain procedure. Apparently a fight broke out between him and one of the hospital guards, who told him to wear a mask. Mustafa responded that the guard himself wasn’t wearing a mask.”

The verbal argument turned lethal in mere seconds, when the guards shot and killed the epileptic man.

A police statement said, “Initial investigations indicated that the young man arrived at the hospital to receive medical treatment, and after the apparent completion of an argument between him and another citizen in the place, he took out his knife and tried to stab him but he did not succeed. When the security personnel arrived, he stabbed one of them and they fired bullets towards him”.

Mustafa’s mother told reporters with Palestine Post 24, “The Israeli police stopped our car and asked my son to get out. He refused, but they pulled him out. When he was pulled out, I also got out, and turned around to see the security guards shooting at him directly from a very close distance.”