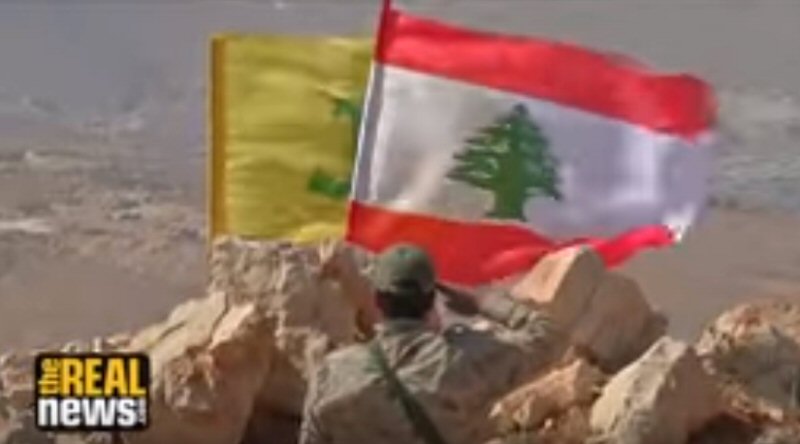 Colonel Larry Wilkerson: Israel does not want to end the war in Syria; it is in their interest to keep this war going, and to keep the Iran Nuclear Deal from succeeding.

SHARMINI PERIES: It’s The Real News Network. I’m Sharmini Peries coming to you from Baltimore. The Israeli military attacked several bases in Hama and Aleppo countryside on Sunday. Israel is becoming notorious for their weekly attacks on Syria, targeting Syrian government forces that are backed by Iranian and Hezbollah forces. Israel has previously hit Iranian-backed militia outposts in Syria, mainly targeting arms convoys of the Lebanese Shia group Hezbollah. Israel regards the group, which is fighting alongside President Bashar al-Assad, as the biggest threat on its borders. Haaretz, the Israeli newspaper, reported that some 200 missiles were destroyed and 11 Iranians were killed in the process, which Iran denies at this time. In the meantime, Netanyahu has been granted war powers authority in extreme situations by the Knesset, with only the defense minister’s approval. This in spite of the fact that the Joint Committee of Foreign Affairs and Defense Committee, as well as the Constitution, Law, and Justice Committee all rejected Netanyahu’s request for such powers.On to discuss all of this with me is Larry Wilkerson. Col. Wilkerson is former chief of staff to the Secretary of State Colin Powell, and now a distinguished professor at the College of William and Mary. Thank you so much for joining me, Larry.

LARRY WILKERSON: Good to be here.

SHARMINI PERIES: Larry what is the purpose on the part of Israel pursuing this kind of aggression in Syria, antagonizing Iran at a time when this war is actually coming to a closure?

LARRY WILKERSON: Israel does not want it to come to a conclusion. Israel sees, as do the neoconservatives in this country, and some others allied with them like Richard Cheney, they see this chaos in the Middle East as conducive to their security. Not only as conducive to their security, but also as sort of allowing them to do their full greater Zionist strategy, which is to get as much territory as they can as fast as they can, to include the water in that territory, which is becoming a rather critical issue for the entire region but for Israel, certainly. And they want this condition to continue. They want it ultimately to lead to the breaking up of Syria, the breaking up of Iraq, if it can happen, and the regime change in Iran. And they see this chaos and this constant conflict in the United States instrumental to that as being strategic means by which to accomplish this purpose.So they are in no way wanting this conflict to end. They want it to continue, and to continue and continue. That’s Israel’s policy.

SHARMINI PERIES: So, Larry, what’s going on in Syria at the moment? There’s some conflicting reports. We are hearing from Haaretz in particular that some 200 missiles were destroyed by the Israelis on Syria, but now we are hearing that it’s much fewer missiles and some drone attacks. What are you hearing?

LARRY WILKERSON: Well, if we’re hearing it from Haaretz it’s probably accurate. That’s one of the few sources of media in Israel that you roughly can trust anymore. I think what I’m hearing, though, is not unlike what I just conducted in a simulation here at William and Mary with my students playing, role playing the members of the National Security Council. U.S. and National Security Council. And that is that Bibi Netanyahu and Avigdor Lieberman, his defense minister, or Likud in general, though I’m hearing that there’s some infighting in Likud, even, are, one, trying to emphasize everything they can about Iran’s perfidy so that they make sure that on May 12 Donald Trump exits the nuclear agreement with Iran.The second thing I’m hearing, and this is more fundamental, this is what we actually exercised in my simulation with my students, is that Israel is preparing everyone in the region, itself, the United States, its sugar daddy, for more robust Israeli military action inside Syria, and possibly inside Lebanon as well. This action would be aimed primarily, initially at least, through air attacks at those storages of missiles and other munitions by Hezbollah and Iran inside Syria, and those elements of Iranian forces inside Syria that Israel feels are, in short, getting too close, and so they need to be taught a lesson.As far as what’s going on right now immediately, I’ve heard that the plumes, the explosions, the degree of rocketry, if you will, bombs dropped, whatever, was quite dramatic last night. That it lit the night sky for a range of distance and time that sort of looked a little like the opening of the war in Iraq in March in 2003. And that the Israelis were very serious about several places, you mentioned Hama and you mentioned Aleppo, that they knew the Iranians had missiles backed up and Hezbollah had missiles, and so forth. So they struck them. I think we’re looking at what could grow and grow and grow, as Israel finds no check on its power, and finds that it is actually delivering body blows, so to speak, to both Hezbollah and Iran inside Syria. So look for more of this.

SHARMINI PERIES: Now, Larry, Haaretz is reporting that 200 missiles were launched and some 11 Iranians have been killed, but the Iranians are denying that. Why are they doing that?

LARRY WILKERSON: I think some words I heard out of Israel, actually out of the Israeli Defense Force just a few moments ago, were that Iran was going to deny that any Iranians were killed because then that would mean immediately Iran has to concoct some kind of reaction, actually respond with military force or in whatever way they would deem appropriate to respond. Saving face, you might call it. So Iran doesn’t admit that any Iranians were killed. But that same Israeli source, for me, said that Iran will respond. They will respond in time, and in the means, by means that they find conducive to their interests, so Israel had best batten down the hatches. There will be a response.I don’t know which of those is more accurate. I suspect that the figures I’m hearing of 16 or 17 Iranians killed is probably accurate. And what Iran will do in response to that is probably in accordance with that second Israeli interpretation, and that is that they will do something, but we’ll not see it for a while. And we may not see it at all, but Israel will certainly feel it. What that means is probably other than conventional military strike. It could mean Hezbollah missiles. That’s what Netanyahu and Lieberman, I think, are trying to elicit. They would like some missiles shot at them. That’s their excuse for doing even more, and perhaps even entering the fray with armored artillery and other forces than just their air force. So this is precisely what Netanyahu a nd Lieberman would like, is an excuse to do even more.

SHARMINI PERIES: All right, Larry, finally, we know that the new Secretary of State Mike Pompeo swiftly took off on a trip to Saudi Arabia, and I understand he’s landing in Israel this morning. What is this trip about, and is this convention, as far as Secretary of State is concerned?

LARRY WILKERSON: I find it rather alarming that this would be the first trip that Secretary of State Pompeo would make without even having lit, apparently, at the State Department for a moment or two. And coming on the heels of Trump’s visit to Riyadh and his sword dance, and all the other things that came out of that, I find it very, very indicative of the amateur hour that this administration is that we would choose to demonstrate these kinds of priorities in the world. He did stop in Brussels. He did go to NATO. So the more important things in the world he apparently has brushed off, and moved on to Jerusalem, Riyadh, and so forth.This is an alarming condition of this amateur hour and White House right now, that they see these places as being most critical to U.S. security. They are not. If you want what they are most critical to, it is Israel’s security. And that’s why Pompeo is there, and that’s why Trump went to Riyadh. So we’re talking about, again, a single state having this kind of influence over U.S. foreign and security policy. And with the amateurs in the White House and the amateur at Foggy Bottom right now, that is an even more deeply concerning issue for me, that this would be what they would do right off the bat.

SHARMINI PERIES: And, Larry, is there anyone challenging this kind of foreign policy approach on the part of the administration there in Washington?

LARRY WILKERSON: There doesn’t seem to be. Not from inside or from outside. You look at President Macron’s recent visit, Angela Merkel’s recent visit. You look at what’s coming out of Theresa May in London and what’s coming out of Europe in general. It’s as if Trump has them kowtowed, or he has them kowtowing to him. He has them stymied. All the 16 trillion dollar GDP, the power of Europe, is in abeyance as the United States does its unilateral thing in the world. It’s quite disturbing to see this kind of thing happening, and to see the United States action being the ingredient , the elixir, the magic, if you will, in this turning of the transatlantic relation even into another tool of U.S. unilateral foreign policy, and that, too, being aimed principally and primarily at the state of Israel and that state’s security. I don’t, I don’t think that should be the number one priority of the United States of America right now.

SHARMINI PERIES: Larry, as you said, Macron’s visit was swiftly followed up by Angela Merkel in Germany. And there was speculation in the foreign policy community that this was in order to ensure that Donald Trump would keep the Iran nuclear agreement intact, which is all up in the air at the moment. But it seems that that was not a very effective in terms of their ability to convince him. What are your thoughts on that?

LARRY WILKERSON: Well, I think it was sound speculation that that was one of their purposes for coming, if not the primary purpose. But I don’t think, I think you’re right, too, I don’t think it worked at all. And what I saw was two leaders who essentially retreated to their fortress in Europe without a clue as to what to do in response to a recalcitrant American president who is going to do what he’s going to do, primarily for domestic political purposes, regardless of what they say or do. I think that was an eye opener for them in a series of eye openers for them. But I see no courage in their response to this point.

SHARMINI PERIES: Larry, I thank you so much for joining us today.

LARRY WILKERSON: Thanks for having me, Sharmini.