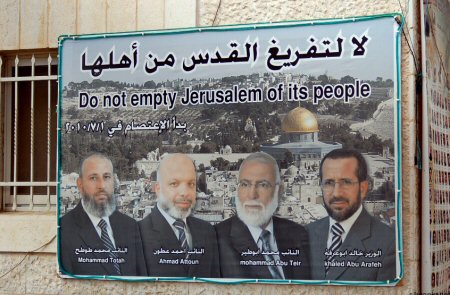 Israeli occupation authorities decided, on Sunday, to strip four Jerusalemite MPs of their permanent residency, under the pretext of not being loyal to Israel.

In a statement, Al-Qawasmi said that the decision came after the Knesset approved a new bill, earlier in March, that allows the interior minister to strip any Jerusalemite of their residency rights if they are involved in “terrorism” or “anti-Israel acts”.

According to al-Qawasmi, the Israeli Supreme Court, in mid-September of 2017, overturned a decision to revoke the residency of the Jerusalemite MPs.

However, it decided to give the Israeli government a time limit to enact a law that gives the interior ministry the power to strip any Jerusalemite of residency.

The Palestinian lawyer described the bill as “unfair” and “illegal,” adding that it was applied retroactively. He affirmed that he will return to Israeli courts, to oppose the decision.

Palestinians in East Jerusalem, along with the Druze in the Syrian Golan Heights, are considered “residents” — not citizens — by Israeli authorities. Revoking their residency, according to the new bill, means expelling them permanently from these territories.

In 2006,  Israeli authorities confiscated the ID cards of the four Jerusalemite MPs, after detaining them upon participation in a protest in Occupied Jerusalem. They spent several months in Israeli jails before they were deported to the West Bank.