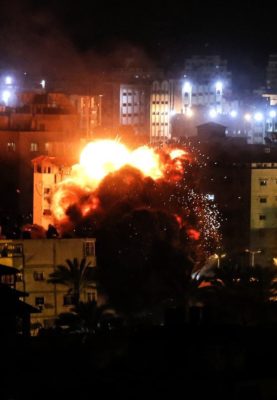 After the Israeli military began its bombardment campaign, dropping close to 100 bombs in the first three hours of Monday evening, Palestinian resistance forces retaliated, firing around 30 homemade shells across the border into Israel, causing no injuries.

Following the attack on Haniyya’s office in the Rimal neighborhood of Gaza City, Israeli forces levelled a three story building in the Sabra neighborhood of Gaza City. The Israeli army issued a statement that “This is a secret headquarters of the Hamas terror group, which is used by the internal security, central intelligence and military intelligence branches of the group”.

But local Palestinians dispute that claim, saying that the building houses the al-Multazem Insurance company.

The Mosque of Omar Ibn Abdel Aziz in Beit Hanoun was hit by an Israeli bomb, destroying most of the building.

But shortly after each of these declarations from the Palestinian leaders, Israeli bombs continued to rain down on Gaza, with truckloads of Israeli missiles being seen driving toward the border, and hundreds of reservists being called up by the Israeli military to deploy to the Gaza-Israel border – giving every indication that the Israeli government has no intention of negotiating a ceasefire, but is instead preparing for a wider-scale assault on Gaza.

No Palestinians have been killed in the Israeli bombardment, but at least eight have been injured, including two children.

The Israeli bombardment of Gaza followed the firing of a rocket from Gaza toward Tel Aviv – for which no Palestinian resistance group claimed credit – wounding eight Israelis, including three children.

That followed two days of Israeli attacks against non-violent protests in Gaza in which three Palestinians were killed by Israeli gunfire, and nearly two hundred were wounded.

Israeli Prime Minister Binyamin Netanyahu cut short his visit to Trump in Washington DC, during which Trump unilaterally declared US support for the Israeli annexation of the Syrian territory known as the Golan Heights by military force – despite the fact that such forced military annexation is a direct violation of international law.

Netanyahu is running for re-election on April 8th – despite his recent indictment on corruption charges. Among his opponents are right wing candidates who claim that the far right Netanyahu is ‘too soft’ on Hamas.