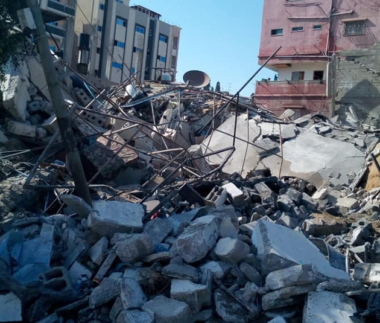 Palestinian Labor Minister Mofeed al-Hasaina has reported, Tuesday, that the Israeli bombing on Gaza, which started on Monday evening, has destroyed 30 civilian residential units, and caused damage to 500 others.

In a press briefing, al-Hasaina said that engineers and workers of the Labor Ministry have started since morning hours, Tuesday, assessing the damage caused by extensive Israeli bombings on Gaza.

He added that the teams started reopening roads that were closed by debris of bombed homes, and buildings.

Al-Hasaina also stated that the Ministry is conducting all needed efforts, including coordination with international institutions, to ease the suffering of the Palestinian people in the besieged and impoverished Gaza Strip.

Ad-Dameer added that this latest escalation is the most violent since Israel’s offensive on the Gaza Strip in the summer of 2014, and called on the International Community to end its silence and intervene to end these serious crimes against the civilian population.

It stated that the Israeli army started its latest offensive of the Gaza Strip on Monday evening, March 25th, 2019, by carrying out more than 50 air strikes, targeting not only sites used by army resistance groups, but also dozens of civilian homes, apartment and commercial buildings, in addition to agricultural lands and structures, causing serious damage and dozens of injuries.