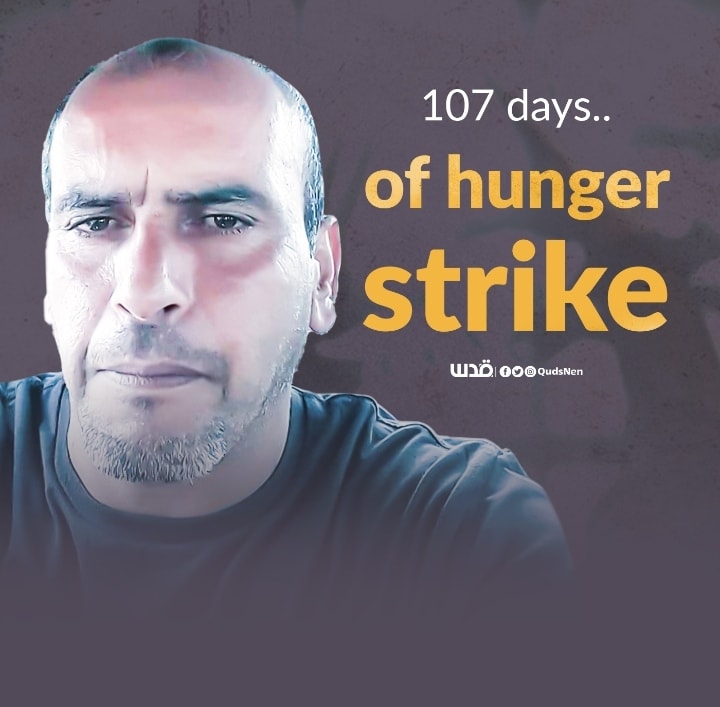 The Detainees and Ex-Detainees Affairs Commission said that the Israeli military court of Ofer rejected an appeal submitted for the release of prisoner Ahmad, Zahran, who has been on an open-ended hunger strike for 107 consecutive days in protest of his detention without charge or trial, the Palestinian News and Info Agency reported.

In a press statement, The Detainees and Ex-Detainees Affairs Committee said that the court demanded that Zahran end his hunger strike before meeting his demand to end his administrative detention, alleging the need to investigate him but his current health condition does not allow it.

To be noted, Israeli investigators from Maskubiya detention and interrogation center attempted to investigate Zahran while he was on al-Ramlah hospital bed, despite his deteriorating condition after 90 consecutive days of hunger strike, however, they were unable to pursue the investigation due to the severity of his health condition.

The commission condemned the Israeli court’s claims and confirmed that it will appeal against its decision at the Supreme Court of Israel.

Zahran was transferred to Kaplan Medical Center in Israel, on Monday, following an even more severe deterioration of his health.

Zahran has lost more than 35 kilograms and his health condition is rapidly deteriorating. He suffers from a slow heart rate, diffuse pain throughout his body and Hyponatremia (low blood sodium), among other ailments.

Zahran was detained in March 2019 and had previously spent a total of 15 years in Israeli prisons for resisting the occupation. He is a father of four, from the Ramallah-area village of Deir Abu Mishaal.

Zahran was previously also on hunger strike but ended it 39 days later after he was told that his administrative detention would not be renewed after it expired.

However, when the Israeli military reneged on this promise and extended his detention by four months, he resumed the hunger strike.