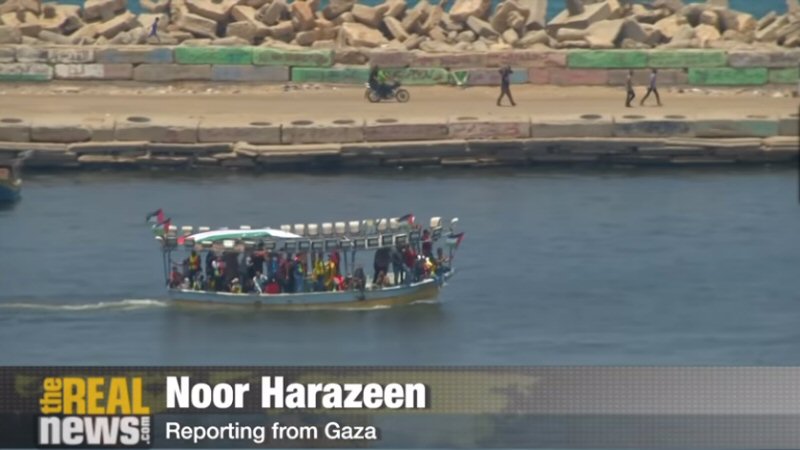 NOOR HARAZEEN: Israeli naval forces on Tuesday confiscated a protest flotilla which had embarked from Gaza Port, with the intention of reaching the Port of Limassol in Cyprus, in a bid to break the more than decade-long Israeli blockade on the Gaza Strip. The vessels, which carried a broader group of seventeen people, including protesters wounded in weeks-long demonstrations along the Gaza-Israel border, patients with cancer and students, was forcibly led toward the Israeli Port of Ashdod.

SHADY AL-NAQLA: I am 28 years old and I hold two bachelor’s degrees. However, I don’t have a promising future here in Gaza. I am participating in these ships to break the siege and follow my dreams to continue my studies. This is a very significant trip for me. Me and many other students and patients are going on this ship hoping for a better future.

NOOR HARAZEEN: The High Committee of the Great Return March, the organizing party of the flotilla, said that as this is the first ever Gaza sea trip which conceded with the anniversary of the Israeli massacre on the Turkish ship, Mavi Marmara, in 2010, is a clear message to the world that the Israeli blockade on Gaza must be lifted.

ESSAM HAMAD: The people of Gaza are sending a clear message to the whole world that the siege that has been imposed by Israel on the Gaza Strip must be lifted. It’s the time for two million people who are living in Gaza to get a sea port and to be able to communicate with the whole world. On board the ship that is leaving today, this journey, are students who have not been able to attend their universities and wounded youth.

NOOR HARAZEEN: Around the same time, Israeli warplanes carried out the most violent airstrikes in the blockaded enclave since Operation Protective Edge in 2014. The strikes came in response to successive mortar barrages fired from Gaza into Israeli communities throughout Tuesday. Five Israelis were reportedly wounded while Israeli warplanes farther struck back, targeting several Hamas and Islamic Jihad positions, including an underground tunnel. Noor Harazeen, The Real News, Gaza.