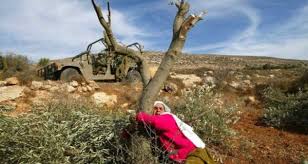 Israeli military bulldozers uprooted, early on Wednesday, dozens of long-standing olive trees in the northern Jordan Valley area of Al-Aghwar, in the occupied West Bank, as part of its illegal annexation plan of the entire area.

Bsharat confirmed that the olive trees, uprooted today, are the property of local farmer, Rab’ya and that the Rab’ya family already has legal documents, which prove their ownership of the farm land, where the olive trees had existed for many years.

It is worth mentioning that the uprooting of olive trees, comes only one week before a planned Israeli annexation of the West Bank’s most-fertile agricultural territory of the Jordan Valley, also known as the breadbasket of the West Bank.

The plan, announced months ago by Israeli officials, has been widely opposed by Palestinians, Arab countries, the European Union, as well as Russia.

The uprooting of Palestinian-owned fruitful trees has been a constant Israeli policy, since Israel occupied the West Bank, back in June 1967. Throughout the West Bank, since then, Israel has constructed hundreds of internationally-recognized illegal colonial settlements.