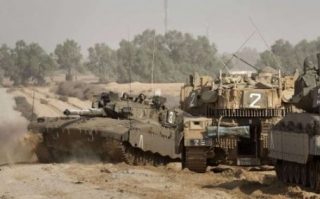 A number of armored Israeli military vehicles and bulldozers invaded, on Monday morning, Palestinian agricultural lands, east of the Tuffah neighborhood, east of Gaza city, and bulldozed them.

Media sources said five armored bulldozers, and several vehicles, advanced more than fifty meters into the Palestinian lands, and bulldozed some of them.

The bulldozers also installed sand hills in the bulldozed lands, especially close to the border fence.

The invasion is the latest of a series of daily violations against the besieged Gaza Strip, and is part of continuous breaches to the Egyptian-mediated ceasefire deal in the summer of 2014.