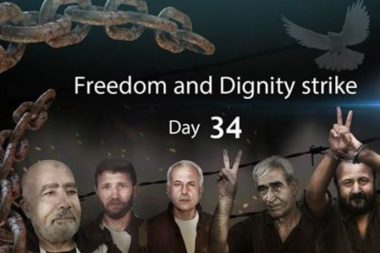 The Israeli Prison Authority has moved, Saturday, several hunger-striking detainees to Barzelai Medical Center, when their health conditions have sharply deteriorated after they stopped drinking water. Prison Authority is still trying to divide the detainees, ignoring their collective, legitimate demands.

Khaled Mahajna, one of the lawyers of the Palestinian Prisoners’ Society (PPS) visited detainee Mohammad Abu ar-Rob, from Jenin and held in Asqalan prison, who told him that the prison administration is pressuring the detainees to stop their strike, and escalating its violations against them.

He added that some of the detainees suffered sharp health deteriorations, and were moved to Barzelai Israeli Medical Center in Asqalan.

He added that the administration in Asqalan prison has also turned one of the prison sections into a field clinic, that lacks even basic supplies, and is trying to administer liquids to the striking detainees’ bodies via intravenous infusion, but the detainees are resisting these attempts.

Mahajna further stated that the administration is trying to hold talks with some detainees, and presenting what it described as “offers,” but the detainees remain united and determined to continue their strike, and informed the soldiers that such talks can only be conducted with the imprisoned leaders of the strike, and not with individuals.

There are fifty Palestinian detainees held in Asqalan prison, and are ongoing with the strike, along with all striking detainees in various prisons, despite their deteriorating health conditions, and constant Israeli violations.

In a letter, the detainees said:

“As their strike enters its 34th consecutive days, we remain steadfast, walking towards death with a smile. All what each of us has is a black blanket, a cup of water and a bit of salt.

We chant for our country, for the upcoming spring, while our bodies are collapsing, but our souls and our spirits are steadfast and strong.

We are standing like the rocks of Mount Ebal and the Galilee, and we swore to continue this fight until victory or martyrdom.

This battle is a candle lit by our souls, and our bodies, to shine the path of freedom and independence.”