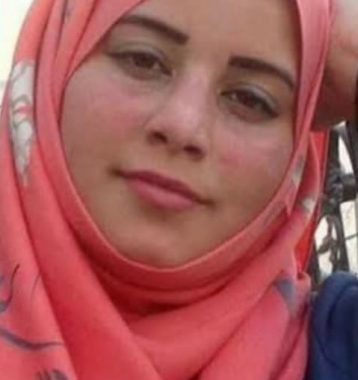 The Palestinian Health Ministry has confirmed that a Palestinian child died, on Saturday evening, from serious wounds she suffered two months ago, after an Israeli soldier shot her at the Etzion junction, south of Bethlehem, in the occupied West Bank.

The Health Ministry said Fatima Jibril ‘Ayed Taqatqa, 15, died at Sha’are Zedek Israeli Medical Center, from serious wounds she suffered after an Israeli soldier shot her with a live round in the head, and she remained on life support machines until her death.

Fatima was shot on March 15, 2017, after Israeli soldiers claimed she “tried to ram them with her car,” near Etzion colony block, south of Bethlehem.

The child, from Beit Fajjar town, south of Bethlehem, had no driver’s license and was not experienced in driving a car. She was shot after her car came to the complete halt.

Eyewitnesses said the child panicked after seeing the soldiers at the intersection, and lost control of her car, causing her to cross the median before striking metal bars protecting a bus stop in the opposite direction before the soldiers started firing at her. The army claimed that the incident was not an accident, but “a deliberate attack.”

Tareq Rishmawi, a spokesperson for the Palestinian government in the West Bank, described the fatal shooting of the child as a direct outcome of Israel’s illegal policies and ongoing violations.

Rishmawi called on the International Community, and human rights groups around the world, to intervene and stop the ongoing Israeli crimes against the Palestinian people, and added that the silence, and idleness, of the world, encourages Israel to commit more crimes.