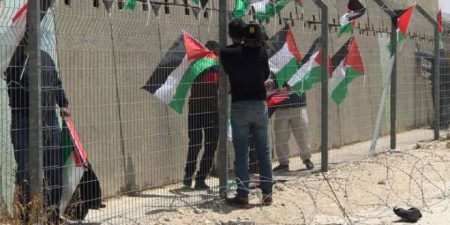 Activists from the Popular Struggle Coordination Committee (PSCC), on Sunday afternoon, broke into the Ofer Israeli military court in Ramallah, and painted logos in solidarity with Palestinian detainees, while raising photos of leader Marwan Barghouthi, who has been leading an open hunger strike among some 1,600 Palestinian prisoners for 35 days now.

In turn, Israeli forces attempted to arrest the activists who broke the razor wire around the court and sprayed solidarity lines on its walls, PNN reports.

Activists also raised Palestinian flags and photos of Barghouthi, saying that the Israeli military courts represent the laws of the extremist, colonial Israeli racist mentality only.

Head of the PSCC, Munther Amira, said that this move was to show solidarity with the hunger striking detainees,  for what they have given to the history of Palestinian struggle, resistance and steadfastness.

For his part, activist Mahmoud Zawahra said that the move was was part of the PSCC’s response to Israeli crimes against Palestinians who try to show any type of solidarity with prisoners, especially since Israeli under cover agents, on Friday, detained PSCC activist Ahmed Odeh, during his participation in a march for prisoners in Bethlehem.