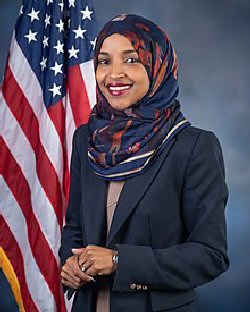 A right-wing Israeli NGO filed, on Wednesday, a petition to have US Congresswoman Ilhan Omar barred from entering Israel, when she arrives for an upcoming tour, because she supports the international boycott of Israel (BDS).

Omar expressed, during recent weeks, her desire to visit occupied Palestine, along with Palestinian-American Representative Rashida Tlaib, a Democrat from Michigan.

Israel’s Ambassador to the United States, Ron Dermer, stated, according to Al Ray, that Israel will not prevent Omar Tlaib from entering Israel, when they arrive for a planned tour, in August.

Shuran HaDin said that its petition included proof of Omar’s activities supporting the BDS movement, including her sponsorship of a bill to allow the boycotting of Israel, earlier this month.

The NGO also cited a recent tweet by US President Donald Trump, calling on Omar and Tlaib to apologize to Israel, the White House and the American people, due to their “horrible statements.

It is noteworthy that the movement of BDS is  quite active in the United States, especially in American universities.

Israel considers any anti- Israeli occupation activity as anti-Semitic, although many American Jews are involved in the activity of the boycott movement, because of their opposition to Israeli policies.