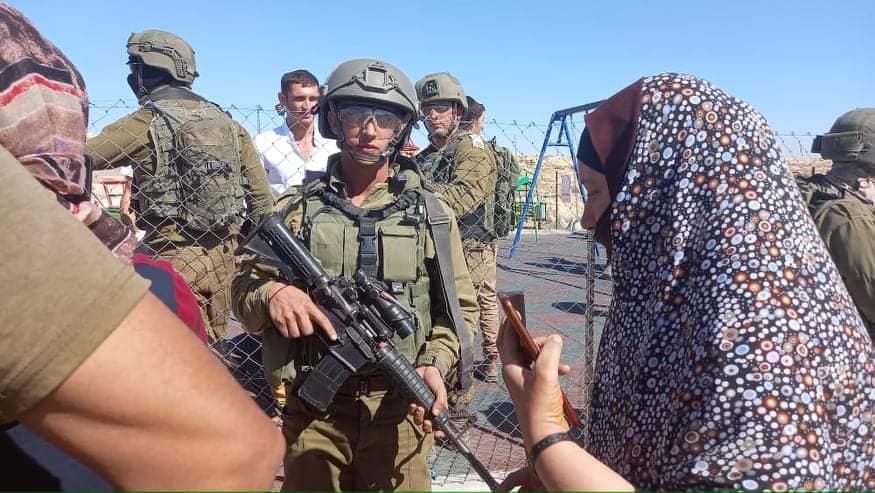 A gang of Israeli colonizers on Saturday attacked a Palestinian children’s playground, scattering the children who were playing there, and destroying their play equipment.

The attack took place in Susiya village, southwest of Hebron in the southern occupied West Bank, according to local sources.

Sources reported that the group of Israeli settlers invaded the playground and began to smash the play equipment. The children ran from the armed men, and villagers, mainly mothers of the children, came to the site to stand up to the armed invasion.

The armed colonizers also brought a German Shepherd dog with them, which they used to try to attack the children.

Rateb Jabour, a local anti-colonization activist, told Wafa news reporters that around 200 Israeli settlers attacked the playing ground and attempted to smash some of the fixtures and equipment that were installed by the France-based Action Against Hunger for the area’s children.

As the mothers and other family members tried to stand in front of the play equipment and shout at the Israeli colonizers to leave, the Israeli army arrived. They did not stop the settlers from their attack, but helped them exit from the location when they were done with their destruction.

extremist settlers stormed the village of Susiya shortly before Where they stormed a children’s park and this was done under the protection of the army. The settlers wandered inside the village and between the homes of the citizens, which left fear in the hearts of the residents. pic.twitter.com/YnEyprYlFS

The Palestinian residents of Susiya have had a decades-long battle with the Israeli government to prevent the seizure of their land by Israeli forces. According to the Israeli information Center for the Occupied Palestinian Territories, B’Tselem, in 2014, the Israeli Civil Administration recommended that the people of Susiya make an alternative plan for a location closer to the town of Yatta. As Susiya lies mere kilometers from Yatta, which is in Area A, the recommendation effectively means transferring the residents of Susiya out of Area C.

“In February 2014, Israeli NGO Rabbis for Human Rights petitioned the Israeli High Court of Justice (HCJ), arguing that the Sub-Committee for Planning and Licensing had made an unreasonable decision in rejecting the master plan. The petitioners requested that the HCJ issue an interim order preventing the authorities from demolishing the village pending a ruling on the petition. In late March 2015, the state submitted its response, requesting the court reject the petition, claiming there was no justification for intervening in a justified decision by the planning institutions to reject the plan. In their response, the representatives of the state noted that the villagers have continued to build structures illegally.

In early May 2015, Justice Sohlberg struck the residents’ request on the grounds that illegal construction had continued in the village after the petition was filed, actions that he termed “taking the law into their own hands”. Justice Sohlberg added that “the Court has noted the willingness of the authorities in the area to work towards examining promotion of an alternative planning cluster”.

Talks between the state and Khirbet Susiya then began, and were underway until suspended by the state. On 1 August 2016, at a court session of Israel’s High Court of Justice (HCJ), counsel for the state said the talks were halted because the new Minister of Defense had yet to formulate his position on the matter. The HCJ gave the state two weeks to formulate its position. Justices Naor, Barak-Erez and Hayut declined to issue orders that the state not demolish the homes of Susiya residents pending formulation of the position. The residents were thus left in a state of uncertainty as to their future and at the mercy of Israeli authorities.

Since the residents of Khirbet Susiya filed their last petition in 2014, the state has announced its intention to demolish several structures built in the village after the petition was filed – including structures renovated after they were damaged in a storm and a medical clinic that serves the entire village. On 1 February 2018, the President of the Supreme Court decided that the state could demolish seven structures in the village, which serve 42 people – about half of them children, and some of them ill persons – immediately.”

Effectively, the Israeli government has been attempting for nearly ten years to force the Palestinian residents of Susiya off their land, in order to seize their land for the state of Israel. Such forced transfers of populations are direct violations of international law and signed peace agreements, but have been common over the past 70+ years of Israeli occupation of Palestinian land. Forced transfers of populations and land takeovers are the means by which the Israeli state has managed to slowly whittle away at Palestinian land, so that Palestinians now live on just 13% of the land that was their in 1948 when Israel was created on the land that was then known as Palestine.