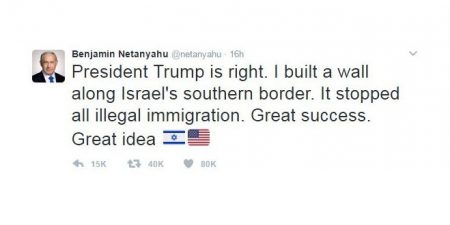 On his Twitter page, Netanyahu wrote that “President Trump is right,” likening Trump’s wall idea to the a 240-kilometre wall Israel completed in 2014, along its border with Egypt.

“I built a wall along Israel’s southern border. It stopped all illegal immigration. Great success. Great idea,” Netanyahu added in the tweet.

Israel had also built a 700km wall around the occupied West Bank, which was also installed in some areas inside the West Bank. The wall is 8 meters high in some areas, as w ell, according to the PNN.

In addition, during an interview with Fox News, on Thursday, Trump justified his decision, citing Israel which, he said, had managed to “stop 99.9 percent” of illegal immigration.

Within a few days after Trump became officially president, Israel announced approval to build thousands of new settlement units in the West Bank, a decision which was slammed by the U.N. and several international bodies.