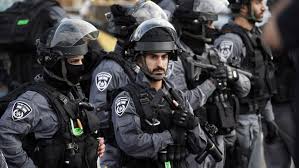 Sources said Israeli police attacked demonstrators with tear gas canisters and stun grenades in an attempt to disperse them, one Palestinian youth was detained after being brutally attacked by police.

Five Palestinians have been on an open-ended hunger strike demanding an end to their unending administrative detention, which Israel uses to incarcerate Palestinian activists based on secret evidence for six months at a time that could be renewed indefinitely.