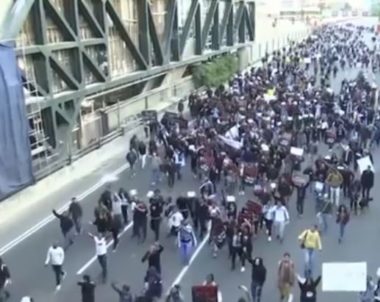 A protest of several thousand Ethiopian-Israelis and their supporters in Tel Aviv were attacked by Israeli police on Wednesday, when they were demonstrating against the police killing of 24-year old Yehuda Biadga by Israeli police earlier in January.

Protest organizers told reporters from the Ma’ariv newspaper that there were a few youth toward the end of the protest who clashed with police, but added that while they understand the rage of the youth, they did not condone the behavior.

The Israeli Police Commissioner told reporters, “The police did all that they were able in order to minimize damage to daily routine. Unfortunately, during the protest a small group of young people decided to commit acts of violence and vandalism, but their destructive behavior did not succeed in overshadowing the impressive accomplishment of the respectful and powerful protest of the [Ethiopian] community.”

The protest was led by Israel’s Ethiopian community, who have long faced discrimination and racism within Israel, including segregation of schools and neighborhoods, municipal neglect of their neighborhoods, overpolicing of their communities and targeting of young Ethiopian men for harassment by the police.

This is despite the fact that the Ethiopian community is Jewish, and thus entitled to special privileges under Israeli law which are not accorded to the indigenous Palestinian population.

The protesters were calling for justice in the case of Yehuda Biadga, 24, who was shot and killed after he allegedly rushed toward a police officer in Tel Aviv.

Biadga’s family reported that he had been suffering from post-traumatic stress disorder when he was confronted and killed by police.