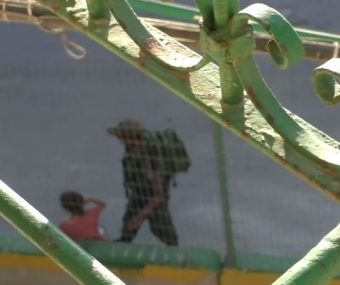 The Police Investigation Unit of the Israeli Justice Department (Mahash) has decided not to indict the Border Guard police officers who, on Monday July 25, 2016, harassed an eight-year-old Palestinian child, in Hebron, and threw her bicycle away for playing in a “Jewish-only” street.

The officers were caught on tape harassing the child, in the center of Hebron city, in the southern part of the occupied West Bank, before they took her bicycle away from her and threw it in the bushes.

A police officer ordered the child, Anwar Burqan, to go home, and she burst into tears. While the girl was crying and wailing, the officer threw her bicycle in the bushes.

The assault was filmed by Raed Abu Romeila, a volunteer of the Israeli Information Center for Human Rights in the Occupied Territories (B’Tselem).

Instead of indicting the officers and sending them to court, the Mahash Investigation Unit decided that the case should go no further than an internal disciplinary committee.

The officers will not face charges of child abuse, or of assault, property damage, theft, or violations of the rights of a child – despite the video evidence clearly showing their abuse of the small child.

The Israeli military prosecutor’s office said the investigations showed that the officers “acted inappropriately and unprofessionally,” but under the current circumstances “there is no need to indict them or continue the investigation.”

On August 1st, 2016, B’Tselem said because of the Israeli military’s installation in September 2012 of “a chain-link fence along the al-Ibrahimi Mosque Street, in Hebron, separating the paved road from a narrow, rough walkway”, Palestinian residents have been prevented from accessing the road.

“Since then, B’Tselem has twice documented security forces denying Palestinians access to the paved road, despite official claims that there is no such prohibition. On 25 July 2016, B’Tselem volunteer Raed Abu Romeila filmed a Border Police officer seizing the bicycle of 8-year-old Anwar Burqan and throwing it in the bushes for riding it down the paved road, which is reserved for settlers.” More info: B’Tselem