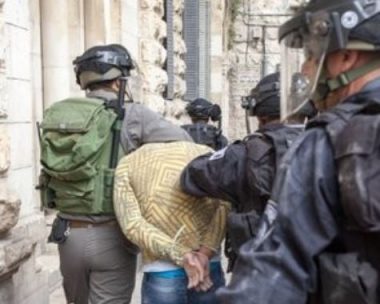 Israeli police forces, at dawn Sunday, invaded the occupied city of East Jerusalem, storming a number of Palestinian neighborhoods, according to local sources.

Palestinian sources and witnesses said that Israeli police forces invaded through out Saturday night and early on Sunday, al-‘Isawiya village and stormed a number of neighborhoods.

Sources added that upon their invasion, crowds of Palestinian residents took to the streets, in protest, as Israeli police fired tear-gas canisters and sound grenades, to disperse them.

It was noted that the police forces broke into several Palestinian homes in the village, which is located in northeastern Jerusalem, and abducted one Palestinian, identified as Ayham Dary, 32.

Along with the abduction of Dary, the police stormed the homes of Palestinian youth, who have been ordered by the Israeli authorities to remain under house arrest.

Witnesses told media outlets that dozens of local youths protested the Israeli police invasion by throwing stones and Molotov cocktails as a means of resistance. No injuries were reported.

For many years now, Israeli police in the occupied city of East Jerusalem, have frequently invaded Arab-Palestinian localities, conducting inspections of homes and abducted Palestinian men, women and children.

Over the past couple of months, such Israeli practices have been reportedly increased, since the US Trump administration announced, it’s so-called vision for peace between Palestinians and Israelis, known as ‘the deal of the century’.

Palestinians, at both the official and popular levels, have rejected this vision vehemently, as it was a one sided deal, for the benefit of the occupation state of Israel .