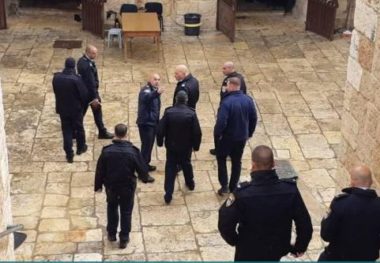 Eyewitnesses said the officers attacked many Palestinians and threatened to abduct and imprison them if they do not leave the holy site.

They added that the officers also chased and attempted to abduct Palestinians, who were using their smart phones to capture the invasions on video.

It is worth mentioning that, on Wednesday, the soldiers and police officers, accompanied dozens of illegal colonialist settlers into the al-Aqsa Mosque compound, after forcing the Palestinian away, and conducted provocative tours.

Bab ar-Rahma Mosque in Al-Aqsa was reopened on February 16th of this year, after dozens of Palestinians protested its closure under Israeli orders for sixteen consecutive years, and managed to reopen it despite continued invasions and attempts to prevent the Muslim worshipers from entering it.

Bab ar-Rahma, as well as the rest of the holy Muslim compound, is subject to constant Israeli violations and invasions.