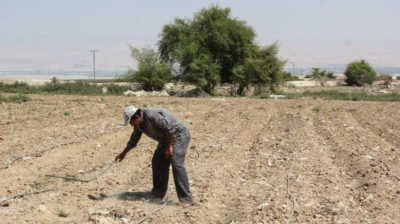 After Mike Pompeo, the US Secretary of State, made a statement Monday reversing decades of US policy, and contradicting international law, by saying that the US did not consider Israel’s colonial takeovers of Palestinian land to be illegal, Israeli Prime Minister Binyamin Netanyahu approved a massive expansion of colonial settlements.

The bill approved Tuesday by the Israeli Prime Minister would authorize the Israeli annexation by military force of the Jordan Valley, home to tens of thousands of Palestinians, many of whom can trace their roots in that area back hundreds and thousands of years.

Netanyahu had campaigned in the recent election partly on a promise to annex the Jordan Valley, the most fertile region of the West Bank, into Israel. When Pompeo made his statement Monday, Netanyahu heralded it as an ‘historic’ moment, and promptly moved forward with the Jordan Valley Annexation bill.

Though this bill had been introduced in the Knesset several weeks ago, it was subject to a mandatory waiting period before coming to a vote. Netanyahu, as Prime Minister, was able to ‘fast track’ the bill, which will now be voted on next week.

Because of the transition period in the Israeli government right now (Benny Gantz had received a majority of the votes in the September election, but has been thus far unable to muster the necessary coalition of parties to form a government), Knesset (Parliament) Member Haskel stated Tuesday that this is a “one time only chance” to pass the bill.

Pompeo’s Monday announcement was the third major policy shift toward Israel that the Trump administration has taken during his presidency – all of which have denied Palestinians their right to exist, their right to self-determination as people and their internationally-recognized right to return to land from which they were expelled by military force. The first two were the moving of the U.S. Embassy to Jerusalem and the recognition of the Golan Heights (a part of Syria that was taken over by Israel in the 1967 war and militarily occupied since then) as part of Israel.

Since its creation in 1948, Israel has never officially declared its borders, and has expanded its territory through military force in the 71 years since then. With each expansion, more Palestinians lose their homes and land and become refugees, forming what has become the largest refugee population on earth.

The Jordan Valley, home to the city of Jericho, lies just west of the Jordan River, and is an area of farmland and orchards – despite the salination and depletion of the river by Israel, it still provides a source of irrigation for farmers in the Jordan Valley. But with the passage of the bill, these indigenous Palestinian farmers and landowners will be subjected to military force and their property taken from them and turned into Israeli settlements.

A September report by Al Jazeera found that many Palestinian residents of Jordan Valley have already been impacted by Israeli colonization of their land and water.

“All our water sources are under Israeli control. We have very little drinking water let alone water for our crops,” Ahmad Atiyat, whose family moved to the area after they were evicted by the Israeli military from along the Jordan River in 1967, told Al Jazeera.

Hussein Saida, another farmer and member of the local municipality, agreed.

“We face ongoing challenges, especially when it comes to accessing our water wells and maintaining them to water our crops. Our water wells are under de facto Israeli control,” said Saida.

All Israeli settlements are considered to be in direct violation of international law.