PCHR: “Pompeo’s Comments on Israeli Settlements are in Contempt of International Law and Abort Peace Prospects” 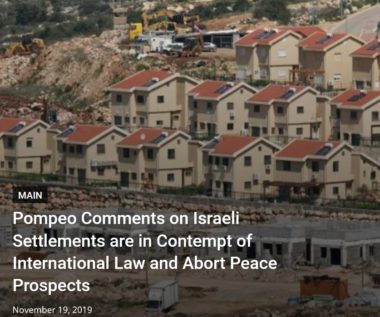 The Palestinian Centre for Human Rights (PCHR) condemns in the strictest terms the remarks made by the United States’ State Secretary, Mike Pompeo, on Israeli settlements, claiming that they are not in contrast with international law. PCHR reiterates that settlements are a war crime under international law and United Nations resolutions and emphasizes that US statements cannot and do not change that fact.

“The US is not the world’s moral authority on justice, it is a State that acts with impunity and in defiance to international law and should be the last to address legitimacy as it acts by the law of the jungle.  The US political position is clearly in support of Israel, a country that occupies Palestinian territory, and supports the latter’s actions and violations against Palestinian people.”

The International Court of Justice (ICJ) had previously ruled, in its advisory opinion of 2004 on the Legal Consequences of the Construction of a Wall in the Occupied Palestinian Territory, on the illegality of the annexation wall’s route through the oPt, basing its decision on the illegality of Israeli settlements asserted in the abovementioned UNSC resolutions.

PCHR asserts that settlements are a war crime, according to Article 8.b. viii of the Rome Statute of the International Criminal Court (ICC), “The transfer, directly or indirectly, by the Occupying Power of parts of its own civilian population into the territory it occupies, or the deportation or transfer of all or parts of the population of the occupied territory within or outside this territory.”

The issue of settlements is one of the files under consideration by the ICC Prosecutor in the investigation the latter launched in January 2015. Meanwhile, the ICC is under direct threats from the current US administration, as the former US National Security Advisor, John Bolton, threatened on 09 September 2018 to sanction the ICC, its judges and Prosecutor if the court decides to open investigations against Israelis or Americans.

Secretary Pompeo’s statements, which amounts to being complicit with a war crime, are the cherry on top on a series of US decisions under President Donald Trump’s administration, which started with the recognition of Jerusalem as the capital of Israel and the decision to move the US embassy to Israel to Jerusalem on 06 December 2017, followed by many decisions that aimed at imposing facts on the ground in addition to political and economic practices to pressurize Palestinians to give up their right to self-determination on their lands.

PCHR underscores Palestinians’ right to self-determination their land and that settlements are, without a doubt, war crimes that no political statement can change international law to adapt with settlements. PCHR calls upon world countries that promote peace and the rule of law to set the record straight and refuse and condemn the statements by the US administration without hesitance.

Furthermore, PCHR repeats its request to ICC Prosecutor, Fatou Bensouda, to open an investigation into Israeli settlements as a war crime under the ICC’s Rome Stature.

Additionally, PCHR highlights the need for international and regional organizations to renew their position upholding respect to the rule of law and the illegality of settlements, specifically the UN, European Union, Arab League, African Union and the Non-Alignment Movement.