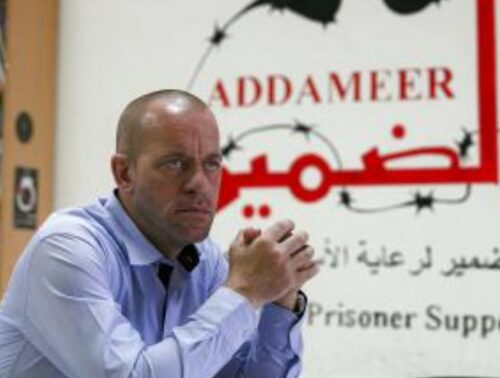 On Wednesday, the Israeli Prison Authority informed imprisoned Palestinian-French lawyer, held under Administrative Detention without charges or trial, that it revoked his Jerusalem ID card and stripped him of all residency rights in occupied Jerusalem, and will be deporting him to France upon his release.

The Israeli occupation imposed a three-month Administrative Detention order against the imprisoned lawyer, Salah Hammouri, 37, and renewed the order in June 2022, then renewed it again in September 2022.

Hammouri, a lawyer and a field researcher with the Ad-Dameer Prisoner Support And Human Rights Association, spent more than eight years in Israeli prisons, starting when he was abducted in 2001 and was sentenced to five months in prison.

In 2004 he spent four months under arbitrary Administrative Detention orders without charges, then was abducted again in the year 2005 and was imprisoned for seven years, and then in the year 2017, he was abducted yet another time and spent 13 months under Administrative Detention orders, and upon his release, he received an order barring him from entering the rest of the West Bank for two years.

On June 6, 2022, Salah received another three-month Administrative Detention order just hours before his scheduled release after being imprisoned for three months under a similar order.

The decision to revoke his residency was made in October of last year, 2021, after accusing him of “breeching loyalty to the state” for his human rights and legal work in defending Palestinian political prisoners.

Salah was born to a Palestinian father from Jerusalem where he grew up and lived, and his mother is a French national.

Several years earlier, Israel deported his French wife to her country after detaining her at the airport in Tel Aviv for three days when she returned to Jerusalem. Salah and his wife have two children.

Palestinians born in occupied Jerusalem are only granted “residency” status and not citizenship of Israel despite Israel’s constant claims of “unified Jerusalem as its capital.” Children born to Jewish parent/s in any part of the world are entitled to become citizens of Israel.

A report by Amnesty International titled “Israel’s apartheid against Palestinians: a cruel system of domination and a crime against humanity” stated that Palestinians in annexed East Jerusalem are granted permanent residence instead of citizenship – though this status is permanent in name only. Since 1967, more than 14,000 Palestinians have had their residency revoked at the discretion of the Ministry of the Interior, resulting in their forcible transfer outside the city.