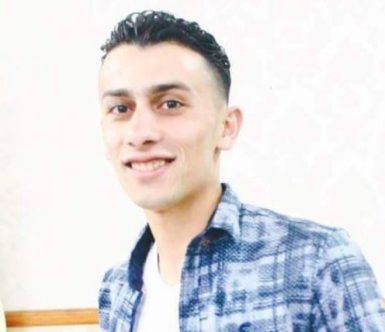 The Palestinian Health Ministry has confirmed that a young Palestinian man was killed, and a journalist was wounded, after an Israeli colonialist settler fired many live rounds at Palestinian protesters, in Huwwara town, south of Nablus, in the northern part of the West Bank.

The Ministry said that the slain young man, identified as Mo’taz Bani Shamsa, 23, from Beita town, east of Nablus, died shortly after he was shot.

A Palestinian cameraman, identified as Majdi Eshteyya, was shot and moderately wounded with a live round fired by the settler.

Ahmad Jibreel, the head of the Emergency Unit at the Palestinian Red Crescent Society (PRC) said Eshteyya was shot in his arm, before he was moved to Rafidia hospital.

Jibreel added that the two other Palestinians, who were struck by the settler’s car, received treatment at the scene.

The incident took place after Israeli soldiers attacked dozens of Palestinians, marching in solidarity with the detainees, ongoing with the hunger strike they started on April 17th.

The soldiers fired gas bombs, causing many Palestinians to suffer the effects of teargas inhalation, two of them, including a man, 49, were hospitalized.

The death of the Palestinian led to clashes between dozens of local youth and Israeli soldiers, who also closed Huwwara road.

It is worth mentioning that an Israeli settler “celebrated” the fatal shooting of the Palestinian, describing him as a terrorist, and distributed sweets to passing cars, while also using foul language against imprisoned Palestinian legislator, Marwan Barghouthi.

Some Israeli media agencies claimed that the settler “survived a lynching,” and quoted him alleging he opened fire on the protesters after “he felt that his life was in danger,” also quoting his wife alleging he “was forced to shoot.”

The Israeli Police said that settler was taken in for questioning, and confirmed that he is not a “criminal suspect.” He is from Itamar illegal colony, built on Palestinian lands, southeast of Nablus.

In a Press Release, the Palestinian Center for Human Rights denounced the killing of the Palestinian civilian, and said that its investigations revealed that the settler passed several cars with high speed and attempted to run over some protesters.

It added that a Palestinian ambulance driver then stopped the settler, who instantly took his gun out and started shooting at the protesters, wounding Mo’taz in the head.

The slain Palestinian is the second to be killed since the detainees’ hunger strike started a month ago. One May 12th, the soldiers fatally shot Saba’ Nidal Obeid, 20, from Salfit, after the army assaulted nonviolent protesters in Nabi Saleh village, west of Ramallah.

The killing of the two victims brings the number of Palestinians, who were fatally shot by Israeli fire since October 1st 2015, to 312, 299 of them were instantly killed, and 13 others died later from serious wounds.