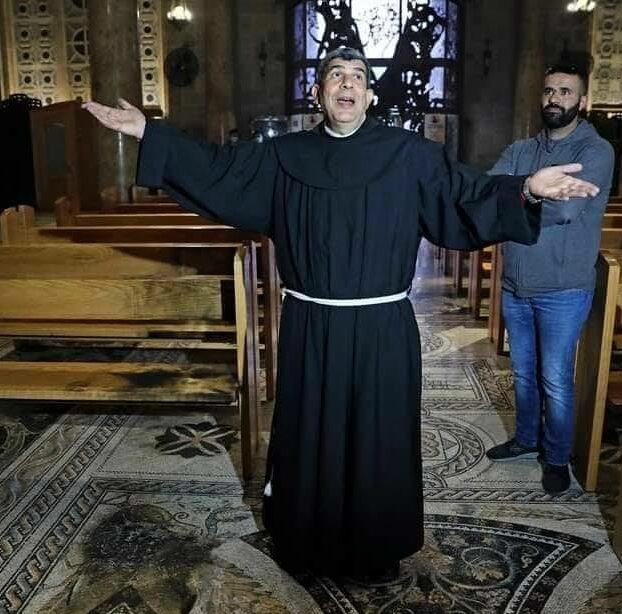 An illegal Israeli settler, on Friday, set fire to the Church of All Nations, also known as Gethsemane Church, in occupied Jerusalem, before being arrested by Israeli police, Anadolu Agency reported.

According to a police statement, a 49-year-old suspect poured flammable liquid and started a fire in the holy site, causing mild damage to the Roman Catholic church.

It added that the arsonist was apprehended by security guards, and subsequently arrested by police.

Eyewitnesses said that after first noticing the attack the church guard Fadi Nicodeme, with the help of two guards of Al-Aqsa Mosque, Hamza Ajaj, and Mahmoud Ajaj, who rushed to help, managed to repel the fire fast and ensure the Israeli assailant didn’t escape until the police arrived.

Hamza Ajaj said he lives near the church, and stated that once he noticed the colonist acting suspiciously, he and his cousin Mahmoud Ajaj rushed to the church, and saw the assailant trying to burn it, before apprehending him with the help of Fadi al-Moghrabi, the church guard, and Khalil Bassa, who works at the church.

The Palestine Chronicle has reported that the suspect, an illegal Israeli settler, was seen dousing the pews with liquid and attempting to burn them but was obstructed.

President Abbas accused the occupation government for this attack, as well as prior attacks, noting the particularly brutal and savage conduct of illegal Israeli colonists, who act with impunity, in plain sight of soldiers.