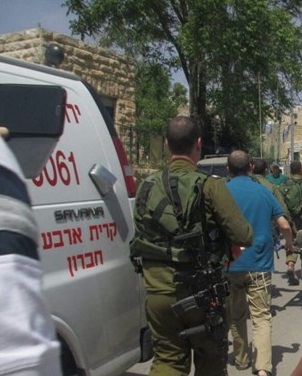 An Israeli settler attacked a Palestinian child with a vehicle on Thursday, causing moderate injuries.

The child, Alaa Ghaleb al-Rajabi, 16, was transported to a local hospital (al-Ahli hospital) and is in stable condition, according to medical sources.

The attack took place near the Ibrahimi mosque in central Hebron, an area known for numerous violent attacks against Palestinian civilians by right-wing fanatic Israeli colonizers.

According to the local news agency Ma’an, photojournalist Raed Abu Irmeileh witnessed the incident. He told reporters that the settler vehicle rammed the teen head-on, then sped away from the scene.

Israeli officials have not announced any investigation, and are apparently not pursuing the perpetrator of the attack.

Israeli attacks against Palestinians, particularly in the Hebron area, are rarely investigated or prosecuted by the Israeli military authorities that govern the area, according to human rights groups.

The reason, according to the Israeli group ‘Breaking the Silence’, is that the military and police authorities in charge of the area are tasked only with protecting the lives and property of Israeli civilians, and have no orders to investigate or pursue charges for any crimes carried out against the indigenous Palestinian population who are the frequent target of attacks.

This means that the Palestinians who are attacked have no legal recourse to pursue justice against those who attacked them.