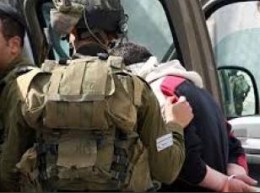 Israeli soldiers kidnapped, on Thursday at dawn, at least ten Palestinians in different parts of the occupied West Bank, during military invasions and searches of homes, the Palestinian Prisoners Society (PPS) has reported. One Palestinian was injured after being rammed by a settler’s car near Bethlehem.

The soldiers used explosives to detonate the door of Saif’s home, before breaking into the property and searching it.

The army also invaded and searched many homes throughout the town, after smashing their front doors, and interrogated many Palestinians.

In Bethlehem, the soldiers stormed and searched many homes, and kidnapped Mohammad Majdi al-Azza, Omar Sami al-Azza, and his brother Mohammad, while a child, identified as Ahmad al-‘Amour, 16, was kidnapped in Teqoua’ town, south of Bethlehem.

In addition, the soldiers closed the Bridge area, linking between al-Khader and nearby villages and towns.

In the northern West Bank district of Jenin, the soldiers kidnapped two Palestinians, identified as Kamal al-Almani, and Bara’ Ateyya, after stopping them at a roadblock.

The soldiers also invaded Abu Dis town, east of occupied Jerusalem, and kidnapped one Palestinian, who remained unidentified until the time of this report.

In addition, the army invaded Hebron city, in the southern part of the West Bank, also searched and ransacked homes, especially in Abu Sneina neighborhood, and kidnapped one Palestinian, identified as Jihad Ezzeddin Abu Turki.

Many homes were also searched in Wad as-Somman area, and many other areas, in the southern part of Hebron city.

On Wednesday evening, Israeli soldiers invaded Shu’fat neighborhood in occupied Jerusalem, kidnapped a child, and also kidnapped a teenager near Tulkarem, in the northern part of the West Bank.