Israeli Soldiers Kidnap A Palestinian Child In Jerusalem, A Teen Near Tulkarem 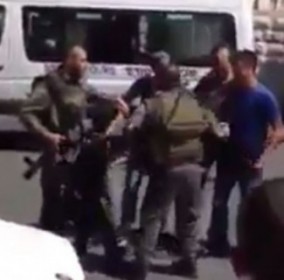 Israeli soldiers kidnapped, on Wednesday evening, a Palestinian child in Shu’fat neighborhood, in occupied Jerusalem, and a teenager at a military roadblock, near Tulkarem.

Several Israeli military vehicles surrounded a car dealership belonging to Jamal Edrees, in Shu’fat neighborhood, in the center of Jerusalem, and searched it before kidnapping his son Majd, only 14 years of age.

Jamal said the soldiers have repeatedly abducted and interrogated his son, under the pretext of participating in throwing stones on the nearby light rail.

Also on Wednesday evening, the soldiers kidnapped a Palestinian, after stopping him on a sudden military roadblock, near Tulkarem, in the northern part of the West Bank.

The Palestinian identified as Kamal Mohammad Taleb al-Almani, 19, was taken to a military base for interrogation.