Palestinian Injured In Jerusalem Bus Bombing Dies Of His Wounds 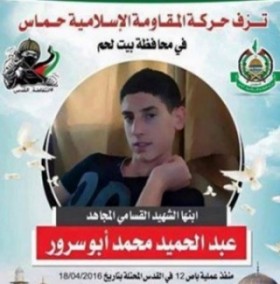 Israeli medical sources have reported, Wednesday, that the Palestinian who was seriously injured in the Jerusalem bus bombing on Monday evening, died from his wounds. Hamas claims responsibility, and said the Palestinian was behind the attack.

The Maan News Agency said it was informed by a spokesperson of the Shaare Zedek Israeli hospital that the Palestinian lost both of his legs in the bombing, and was severely burnt. Doctors conducted surgery, but were unable to save his life.

The Palestinian Health Ministry said the Palestinian has been identified as Abdul-Hamid Abu Srour, from the ‘Aida refugee camp, in the West Bank city of Bethlehem.

The bombing led to 21 injuries, while three of them, including Abu Srour, suffered moderate to severe wounds.

Israeli daily Haaretz said the explosive was the result of a small bomb placed at the rear of the bus, and that after the device went off, it burnt the entire vehicle and spread to a nearby empty bus and a passing car.

It added that all passengers in the bus managed to escape, yet, the majority suffered burns due to the resulting fire.

Following the blast, Israel deemed the incident as an attack, issued a gag order on the details, and launched an investigation.

The Israeli Police and security services were apparently unable to determine conclusively if the Palestinian was involved in the bombing, but the Hamas movement later issued an official statement claiming responsibility, and naming Abu Srour as the bomber.