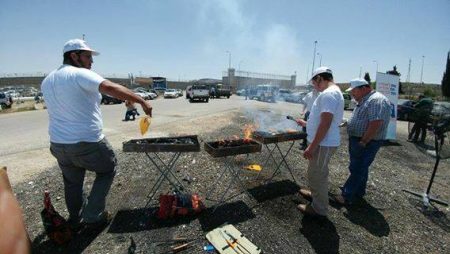 A group of Israeli settlers, on Thursday afternoon, held a barbecue party outside Ofer prison, west of Ramallah, in response to the collective hunger strike lead by 1,500 Palestinian prisoners.

According to the PNN. the insulting move came in response to the hunger strike which Palestinian prisoners launched on the Palestinian Prisoners’ Day, starting 17 April, against Israeli prison policies.

The demands of the Palestinian detainees revolve around the right to have proper visits by their families, having proper health care, ending the solitary confinement, changing the inhumane way of transportation between prisons and tending to other similar basic needs issues.

For the third day of the detainees’ hunger strike, Israeli Prison Service carried out campaigns to transfer hundreds of detainees to solitary confinement in many prisons, after taking their personal belongings such as blankets and clothing.