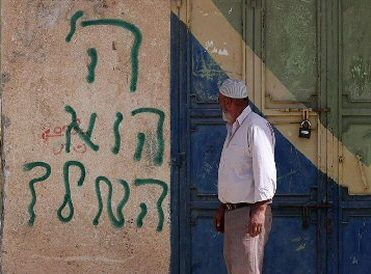 Daghlas added that racist graffiti was spray-painted on the walls of many Palestinian homes.

According to Israel’s Haaretz, twelve vehicles were vandalized by settlers, near the illegal colony of Ariel.

The Israeli Police reportedly launched an investigation into the matter.

Sami Halil, a resident of the village was quoted by Haaretz; “We got up this morning to discover that car tires in the neighborhood were damaged and that there was graffiti on the houses,” he said, “I checked my security camera and saw that whoever did this had come close to the window where my children were sleeping.”

The Fourth Geneva Convention clearly and unequivocally states that all settlements on occupied territory are illegal. International Law states that the occupier [Israel] is forbidden from transferring parts of its population onto the land it occupies [Palestine].