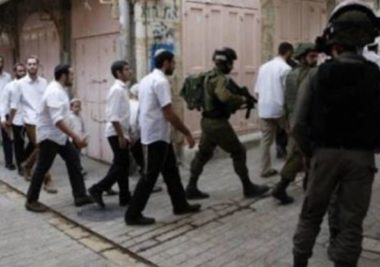 Local activist, Imad Abu Shamsiyya, stated that a crowd of illegal colonists physically attacked a Palestinian minor, identified as Haytham Abu Aisha, 15, in the Tel Rumeida area in central Hebron, part of what is known as H2.

When the boy’s father, Tayseer, tried to protect his child, Israeli soldiers struck the man in the back.

“Violent conduct by settlers has also become routine in the area. Over the years, systematic abuse and harassment of Palestinians by settlers has become an established part of life in Hebron. As often as not, the abuse takes the form of severe violence. Documented instances include physical assault, stone-throwing, vandalism, theft, verbal abuse, as well as shootings.

Soldiers are to be found on every street corner wherever there are Israeli settlements. Nevertheless, they rarely intervene when settlers attack Palestinians. Even after the fact, the Israel Police hardly ever investigate settler assaults against Palestinians or their property – in spite of the many security cameras crisscrossing the city – and very seldom take action against the perpetrators. This is tantamount to the police backing the settlers’ acts of violence.”