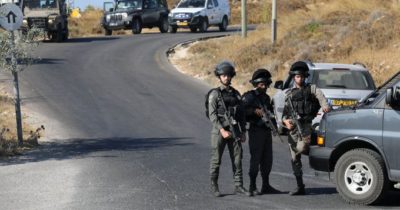 Israeli authorities announced Thursday morning that they had found the body of a 19-year old Israeli soldier on the side of a road in the  south-central part of the West Bank, and believe he was the victim of an attack.

The perpetrators of the attack remain unknown, although Israeli authorities say they assume the attackers were Palestinian.

The nearest Palestinian village to the location where the body was found is Beit Fajjar, south of Bethlehem. Israeli forces stormed the village and put a complete closure on the area.

The victim was identified as Dvir Sorek, who was a settler living illegally on stolen Palestinian land in the settlement of Ofra. He was a corporal in the Israeli army.

He was a student of the Jewish religion at a yeshiva (religious Jewish college) in the settlement where he lived. He was also an active duty Israeli soldier.

According to Israeli sources, Sorek had gone to Jerusalem to shop, but did not return home last night. His family reported him missing Wednesday night, and police began a search, finding his body about 2:30 am Tuesday morning.

The Israeli military say their theory is that Sorek was pulled into a vehicle and killed, then dumped on the side of the road, and they presume that this was done by Palestinians.

An Israeli military spokesperson told the Israeli paper Ha’aretz that the military is “beginning to carry out steps on the working assumption that there is a terrorist cell in the area that carried out the attack.”

The Israeli Prime Minister Binyamin Netanyahu stated that the military is “in pursuit now in order to capture the despicable terrorist and bring him to justice.”

The military has closed off nearby Palestinian villages and invaded them, issuing an order for Palestinians to remain in their homes.

This comes on the eve of the major Muslim holiday Eid al-Adha, when many Palestinian families were planning to visit family in different parts of the West Bank. The curfews and closures have forced the families to remain indoors, and are a type of collective punishment on the Palestinian population in the area.